Likely not cannibalism issue, as knifemarks not near the meat. Er, OK 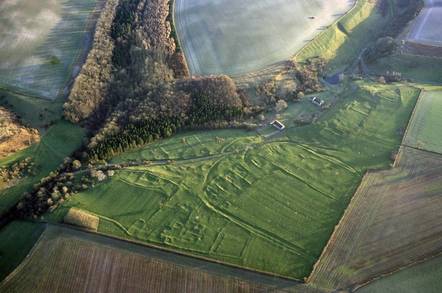 Archaeologists investigating human bones excavated from the deserted mediaeval village of Wharram Percy in North Yorkshire have suggested that the villagers burned and mutilated corpses to prevent the dead from rising from their graves to terrorise the living.

Although starvation cannibalism often accounts for the mutilation of corpses during the Middle Ages, when famines were common, researchers from Historic England and the University of Southampton have found that the ways in which the Wharram Perry remains had been dismembered suggested actions more significant of folk beliefs about preventing the dead from going walkabout.

Their paper, titled A multidisciplinary study of a burnt and mutilated assemblage of human remains from a deserted mediaeval village in England, is published today in the Journal of Archaeological Science.

Located in the Yorkshire Wolds, Wharram Percy was continuously occupied for about 600 years, and was probably founded in the 9th or 10th century, but had become deserted by the early 16th century as a result of gradual abandonment and forced evictions. The ruined church is the last-standing mediaeval building, beside it remaining the grassed-over foundations of two manors and about 40 peasant houses and their outbuildings.

Since 1948 the settlement has been the focus of intensive research, which has made it Europe's best-known deserted mediaeval village, and in what may be the first good archaeological find regarding the practice, human remains from the site suggest the predominance of folk beliefs regarding revenants in 11th-13th century England.

Restless corpses were usually thought to be caused by a lingering malevolent life force in individuals who had committed evil deeds or created animosity when living, according to the researchers, and a number of mediaeval writers describe various ways to deal with revenants, one of which was to dig up the offending corpse, decapitate and dismember it, and burn the pieces in a fire.

According to the researchers, in cannibalism the knife marks on bones tend to be clustered around major muscle attachments or large joints, but at Wharram Percy the knife marks were mainly in the head and neck areas.

There was also the possibility that the corpses were treated differently because they were outsiders. However, analysis of strontium isotopes in the teeth showed this was not the reason here.

Alistair Pike, Professor of Archaeological Sciences at the University of Southampton, explained: "Strontium isotopes in teeth reflect the geology on which an individual was living as their teeth formed in childhood. A match between the isotopes in the teeth and the geology around Wharram Percy suggests they grew up in an area close to where they were buried, possibly in the village. This was surprising to us as we first wondered if the unusual treatment of the bodies might relate to their being from further afield rather than local."

First author Simon Mays said: "The idea that the Wharram Percy bones are the remains of corpses burnt and dismembered to stop them walking from their graves seems to fit the evidence best. If we are right, then this is the first good archaeological evidence we have for this practice. It shows us a dark side of Mediaeval beliefs and provides a graphic reminder of how different the Mediaeval view of the world was from our own." ®

50 ways to leave your lover, but four to sniff browser history

Vulnerabilities that expose browsing history yet to be fixed

Renegade Android apps can siphon off your web logins, browser history. So make sure Chrome or OS is patched, friends

History shows why geeks will never, ever, ever... get along

Now you've read about the bonkers world of Elizabeth Holmes, own some Theranos history: Upstart's IT gear for sale