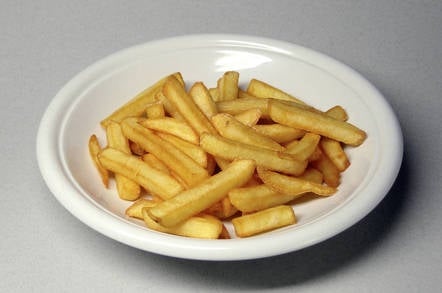 British chip designer Imagination Technologies is in trouble after Apple told the firm it would no longer be using its graphics processor cores.

Apple, the firm’s largest customer, said it would stop using Imagination’s PowerVR GPU intellectual property in about two years’ time. This had a severe and immediate effect on Imagination’s share price.

At the time of writing, the price had crashed from 268.75p to 84p, before rebounding to 106.25p. Such immediate crashes and rebounds are not unusual when bad news about listed companies becomes public.

“Apple has asserted that it has been working on a separate, independent graphics design in order to control its products and will be reducing its future reliance on Imagination’s technology,” said Imagination in a statement.

“Imagination believes that it would be extremely challenging to design a brand new GPU architecture from basics without infringing its intellectual property rights,” it continued, claiming that Apple – which owns about 10 per cent of the British firm – must be on the brink of being very naughty.

The firm said it had offered Apple cheaper terms for its licensing and royalties, but this was evidently rebuffed. The current arrangement netted Imagination £60m last year and it was predicting income of £65m this year from the US mobe-maker until the plug got pulled. The Register understands Apple makes up around half of the firm’s annual revenues.

London business newspaper City AM quoted a variety of talking heads commenting on the deal, including Neil Shah of Counterpoint Research, who said: “Many verticals such as automobiles, AR, VR are going to be super graphics-oriented - hence move from CPU to GPU. See NVIDIA's growth. Apple building its own GPUs though from scratch will be challenging unless they have acquired IP in some form or mastered reverse engineering.

A blogger on the Macrumors website also noted that Apple appeared to have been quietly hiring a number of engineers from Imagination over the past year. Last March, Apple confirmed that takeover talks had taken place but did not lead to an offer. At the time, the firm was valued at £500m. ®