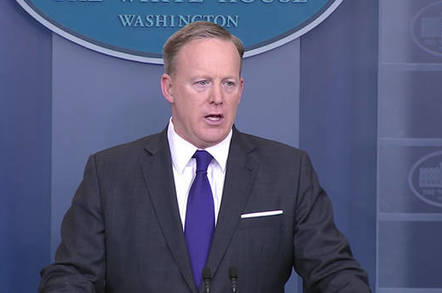 President Trump is spoiling for yet another fight and this time, much to the despair of internet experts, it is net neutrality.

At a White House press conference on Thursday, presidential spokesman Sean Spicer went out of his way to highlight the controversial topic and characterized it using the Trump Administration's favorite insults: that it was a product of the Obama Administration and was developed by "bureaucrats in Washington."

Spicer noted that the previous administration had reclassified cable companies as "common carriers" and by doing so was "picking winners and losers" by "treating ISPs as different to edge providers such as Google or Facebook." This was an "unfair regulatory framework" that he noted President Trump had "pledged to reverse."

The decision to bring up the highly contested issue of net neutrality, especially in the same week that Congress voted to get rid of privacy protections for ISPs, would usually be an odd one, but seems to follow the Trump Administration's scorched-earth approach to policy-making.

It may also detract from yet another revelation over the administration's ties to Russia and the resulting Congressional investigations. Earlier the same day, it was revealed that the anonymous "whistleblowers" who had provided classified information to the chair of one of those investigations were in fact highly placed White House officials.

Regardless, the decision to revoke net neutrality has caused immediate reaction. The World Wide Web Foundation (aka the Web Foundation) put out a statement just hours later complaining that the Trump Administration had "promised to drive economic progress for all and defend freedom of speech."

Maintaining net neutrality rules – which make it illegal for companies to discriminate between different types of internet traffic – would "preserve the internet as it should be," as well as "be key to delivering on these promises," the Web Foundation claimed.

It went on: "Congress and the FCC have a choice to make. Keeping net neutrality is a commitment towards offering today's entrepreneurs the same opportunities the founders of Google or Paypal had, ensuring everyone can have a voice online, and guaranteeing that poorer or rural communities can enjoy the same quality of content as wealthy urban dwellers."

Conversely, it argued: "Scrapping net neutrality rules would give big cable companies a green light to carve up the internet and pick winners and losers online based on who has the deepest pockets."

There is unlikely to be anything new to say in the long and contentious debate over net neutrality. The decision by the FCC to pass the Open Internet Order followed more than a year of fierce debate.

The rules are going to be difficult to unravel, especially since the FCC has already defended them in court and won. The new FCC leadership – which voted against the rules – is expected to try to undermine the rules by failing to enforce them. But in order to remove them, the FCC would need to develop a replacement – something that will be difficult, time-consuming and guaranteed to dredge up the same controversy all over again.

The other option is for Congress to pass new communications legislation. The United States is in desperate need of such legislation, since the last relevant laws were developed in 1996 – a time so early on in the internet's development that the global network merited only a single paragraph's policy outline.

But such legislation would also be a huge undertaking. Given Congress' recent failure to pass healthcare legislation despite the Republican Party controlling both houses and the presidency, the idea of far-reaching telecom reform looks like a pipe dream.

So what does President Trump hope to do with net neutrality? He could sign an executive order telling the federal government not to enforce the Open Internet Order. But in reality that would be little more than a piece of paper, given the semi-autonomous nature of federal regulators and the current position of the FCC.

Trump could use his bully pulpit to urge Congress to enact new legislation – but there are other topics such as tax reform and infrastructure building that he has persistently argued are much greater priorities.

He could urge the FCC to draw up a net neutrality replacement – but the fact that the president has asked for it wouldn't in any way remove the problems regarding replacement that exist in doing so.

Or Trump could simply use the topic to stir up a cloud of animosity whenever his record of achievement comes under attack. That last option is probably the most effective use of the net neutrality issue. ®