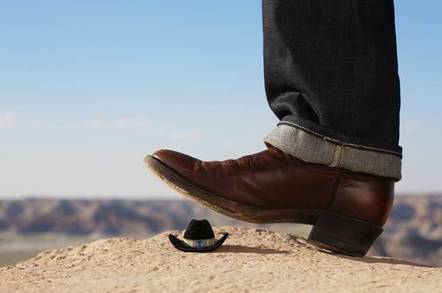 A former IT administrator working at a cowboy boot manufacturer has pled guilty to hacking the servers and cloud accounts of his employer after they fired him and had him removed from the building.

Joe Vito Venzor, 41, had been employed by the Lucchese Boot Company in El Paso, Texas, but he was let go on September 1 last year. This didn't go well – the criminal complaint [PDF] states that he became "volatile" and that it took staff an hour to get him out of the building after his meeting with the IT director.

As a precaution, Venzor's access rights were revoked as he left the building. However an hour later an "elphaser" administrator account logged onto the company's network and shut down the corporate email server, followed by its application server, which ran – among other things – the main production line.

The attacker deleted files on the servers to block any attempts for a reboot, and then set to work on the firm's cloud accounts, shutting them down or changing the passwords. Very quickly the entire company's IT infrastructure came under attack.

Suspecting the obvious, the IT director investigated Venzor's work email account and found he had emailed a document to his private email address. The document was a list of network access codes and passwords for various IT subsystems, listed coincidentally in the exact order that the firm's accounts were in the process of being hacked.

Using the list, the director got ahead of the attacker and began changing passwords himself to mitigate some of the damage and lock out illegitimate access after 45 minutes. This was only partially successful and, after three hours of trying to get the servers back online, the other manufacturing and admin staff were told to go home for the day.

The attacker's work was so effective that the application server was totally borked and the company ended up having to buy a new one and reinstall all the software on it. Outside IT staff had to be brought in to sort out the mess and the firm claims it lost $100,000 in new orders, on top of all the extra IT costs.

During the course of the cleanup, investigators found that Venzor had set up the elphaser account from his work computer, which no one else had access to. The account was designed to look like an innocuous service account, but had full admin privileges where none were needed.

He was arrested shortly after the attack by the FBI and charged with unauthorized intrusion upon protected computers. On Thursday he admitted his crimes and now faces up to 10 years in jail and a possible $250,000 fine, plus paying the costs of his old employer. ®