Tech companies will struggle to take over the road 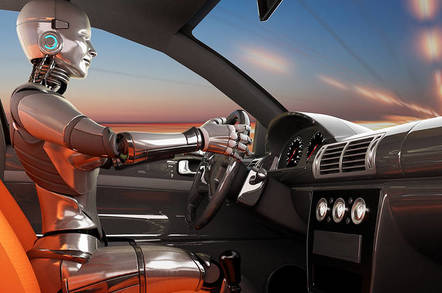 Dr Ian Robertson, a member of BMW's board of management and a former chairman of Rolls Royce Motor Cars, told the SMMT Connected Conference that the car industry was at a crossroads, with the onset of connected vehicles in the coming years, alongside electric vehicles.

Increasing connectedness and a move towards autonomous driving was a given, he said, with the US relaxed about the idea, the Far East excited, while Europe was slightly more conservative and pondering its regulatory response.

While time, comfort and security was the benefit for customers, the possibilities – and challenge – of the technology was "the exciting thing" for the engineers.

Robertson noted that the Airbus 350 generated around 2.5TB data a day, in what was a relatively "simple environment" with hardly anything coming in the opposite direction, and three pilots on hand to take over in the event of a problem.

By comparison, he said, test fleets of autonomous vehicles were currently generating 4TB per day per car – "and it's going to grow".

The focus on silicon and data has fuelled ambitions among the tech sector that they should barge into the vehicle market – whether by building vehicles themselves a la Tesla or hijacking much of the infrastructure, like Uber, reducing automakers to just churning out tin.

But Robertson said that although there had been claims from some companies that they had cracked autonomous driving, they had since rowed back. He didn't name anyone, but it would seem more likely he was thinking of Silicon Valley's finest than his established competitors.

"I think the technology will be robust enough in about five years," he predicted. Even then, he said, progress would be patchy, with differences between motorway and urban driving, and regulations varying from country to country.

What would be more consistent, he suggested, would be the role of established motors companies in this transformation.

"[We're] moving in the direction of being a tech company," he claimed. "It's much more difficult for a tech company to become an auto company."

At the same time, he said, there were limits in how far the likes of BMW should push into the tech infrastructure side.

Asked about the role of 5G in underpinning autonomous vehicles, he said that although it made sense for BMW to get involved in building out networks of charging stations for electric vehicles, doing the same for 5G was not probably not something for the auto industry to get involved in right now. ®

Patch inbound for Beemers, Minis and Royces with a clear view of the sky