This time it's palm oil instead of a single dead cow 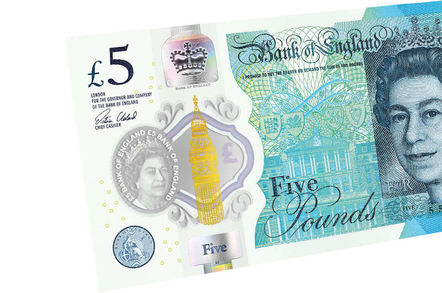 The new fiver, made from a plastic which involved tallow. New £20 notes are set to use palm oil instead of tallow. Pic: Bank of England

Poll First it was vegetarians and vegans complaining about plastic banknotes. Now the Bank of England has managed to upset environmentalists at the WWF – wildlife, not wrestlers – over plans for new plastic £20 notes made using palm oil.

In a public consultation on its website, the bank says that after the furore over less than one cow's worth of tallow being used in its entire plastic fiver production run, it now wants to switch to palm oil.

Oddly enough, making secure banknotes is a "complex" business. Rather than getting on with it, the bank has "put on hold" its tender for the new notes and even paid for a 77-page report from a consultancy to argue in favour of palm oil.

Predictably, this failed to please everyone. Step forward environmental campaign group the World Wildlife Fund (WWF), whose Dr Emma Keller said: "People don't want the bank notes in their pocket to come with such a high environmental cost. The bank must only source RSPO (Roundtable on Sustainable Palm Oil) certified sustainable palm oil or none at all."

What's wrong with palm oil? Production of it has been linked to deforestation, with the WWF in particular saying that the equivalent of 300 football fields of rainforest per hour is cleared for the planting of palm trees, growing the fruits from which the oil is extracted. In addition, the Bank of England's own report notes that palm oil is linked to child labour, toxic pesticides and various other social ills.

There are ways of mitigating these problems, mainly by using sustainably sourced palm oil from certified outlets. Even that isn't perfect, as the bank's report notes: "Stakeholders have also raised concerns about the credibility of RSPO's approach to enforcement."

"Whichever oleochemical derivatives feedstock is chosen, the volume required for the production of the new polymer banknotes is far too small to act as a driver of any additional production," said the Efeca Report, paid for by the Bank of England, into the various feedstock options for the new banknotes.

So, which should it be for the future of the Great British Banknote: one cow or potentially dodgy palm oil? You can tell the bank on its official consultation page, and you can vote below or have your shout in the comments section. ®