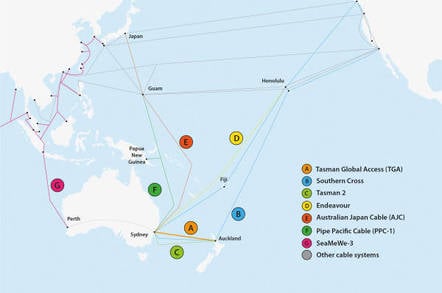 An NZ$100 million submarine cable has given New Zealanders a bit more diversity in their connections to the outside world.

Even more than Australians, Kiwis are afflicted with restricted Internet connectivity and diversity, with only the Southern Cross Cable Network linking the nation directly to the US and to Australia.

Tasman Global Access (TGA) is a two-pair, 20 Tbps cable that runs from the northern Sydney landing at Narrabeen to Raglan in New Zealand's North Island. Kiwi blogger Paul Brislen notes the NZ landing is distant from the Southern Cross in Takapuna.

Takapuna is in the Auckland Volcanic Field, currently dormant but with the potential to become active in the future. New Zealand is also earthquake-prone, which also argues in favour of geographic diversity.

That makes sense: Akamai and Amazon Web Services, for example, both serve traffic out of Sydney, for example. ®