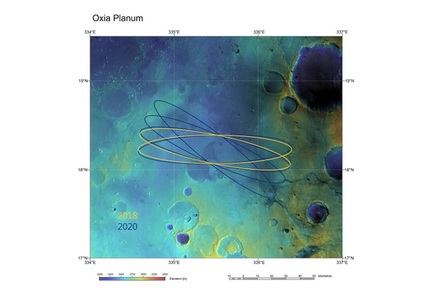 Oxia Planum, one of two possible landing sites for the ExoMars 2020 mission

The European Space Agency has narrowed its candidate list of landing sites for the ExoMars rover to two choices.

ExoMars should fly in the year 2020 and will carry a rover and a stationary observer to the Red Planet.

The big question is where to land both. The ESA prefers locations that offer opportunities to explore hitherto-unvisited bits of Mars and look for signs of life. It's also important that a landing site be free of obvious obstacles that will imperil a landing, like steep slopes, loose material or large rocks. Low-lying regions are also favoured, as they possess denser atmospheres necessary for the planned planned parachute-assisted landing mechanism.

Oxia Planum had already made the final shortlist. The ESA's description of the region says it features “ancient, clay-rich outcrops [that] may have formed in aqueous conditions that could have hosted micro-organisms and the fine-grained sediments could have preserved evidence of their existence.”

The other two sites each had similar characteristics, but Mawrth Vallis (Google Maps) got the nod because it is felt to offer “extensively layered, clay-rich sedimentary deposits, and a diversity of minerals that suggests a sustained presence of water over a period of several hundred million years, perhaps including localised ponds.”

The detailed description explains it also features “... one of the largest exposures of phyllosilicates (clay minerals produced by chemical weathering) detected on Mars. These deposits provide a unique opportunity to evaluate aqueous activity on early Mars and point to the possibility that habitable environments may have existed during the Noachian period (from the formation of the planet to perhaps 3.6 billion years ago). Other deposits and outcrops in the region show the highest degree of mineral alteration identified so far on Mars.”

Perhaps the ESA's Landing Site Selection Working Group was also tickled by the fact Mawrth Vallis borrows the Welsh word for Mars. The Working Group won't make a final decision until a year before the mission launches, so put early 2019 in your diary to learn about where ExoMars will aim to land.

Then cross your fingers that the ESA has ironed out the software problem that caused the Schiaparelli Lander's parachute to mis-fire. That problem turned the lander into an expensive smoking crater.

NASA's going through a similar selection process for its own Mars 2020 mission. In February it named three landing sites. Like the ESA, it's looking for places thought to have once been wet and warm, in the hope of finding signs of little green microbes. ®