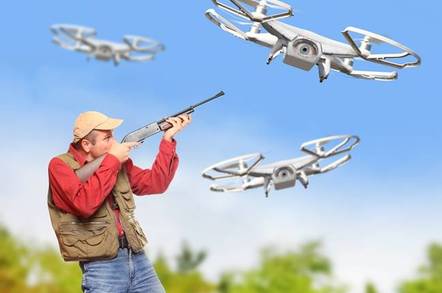 An appeals court has snubbed a drone owner's demand for $1,500 compensation from a furious dad who blew the flying gizmo out of the sky when it hovered over his family.

In July 2015, William Merideth, 47, was at home in Hillview, Kentucky, America, when his daughter came in from sunbathing in the garden to say there was a drone buzzing overhead. As a firm believer in his Second Amendment rights, Merideth loaded up his shotgun with bird shot, waited until the camera-fitted quadcopter came over his home, and then took it down with a single shot – which bought the drone's operators running.

"They asked me, 'Are you the S-O-B that shot my drone?' and I said, 'Yes I am'," he told journalists. "I had my Glock on me and they started toward me and I told them, 'If you cross my sidewalk, there's gonna be another shooting'."

The police were called and they arrested Merideth – not for shooting down the drone per se, but for discharging a firearm within city limits. In October, a judge agreed with Merideth (now known as the Drone Slayer) that he was within his rights to take down the trespassing drone. The dad was cleared of all charges.

David Boggs, the drone's owner, was not a happy chap. He sued Merideth for the $1,500 it had cost to replace his toy, insisting that only the US Federal Aviation Administration has the right to control airspace, so his aircraft couldn't have been trespassing.

The problem is there is considerable confusion about the jurisdiction of the FAA. The agency claims it is responsible for everything from the ground up, but numerous court cases have established different limits for when the airspace becomes a government issue.

A court case in 1946 established that homeowners can control up to 83 feet above their property, while also suggesting a 500-foot limit before the FAA took jurisdiction. Other cases have made similar rulings, but this has never been established by Congress.

In the case of Boggs verses Merideth, the courts disagreed with the plaintiff and refused to order compensation be paid. Undeterred, Boggs appealed, and this week was again told he had no case against his shotgun-toting nemesis.

Louisville appeals court judge Thomas Russel wrote [PDF] on Tuesday that the "federal question jurisdiction over Boggs' claim for declaratory judgment ... does not exist," and threw out the compensation case. Boggs, who also wanted his considerable legal bills covered, is free to try for a new appeal in hopes that the third time will be the charm, but he seems unlikely to get any money. ®