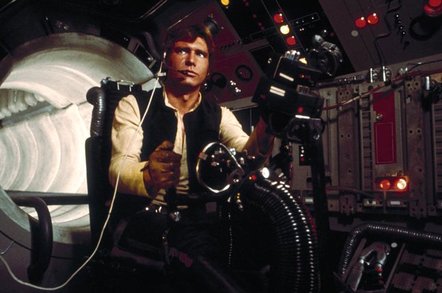 Disney CEO Bob Iger has told a conference that the company is contemplating “what could be another decade and a half of Star Wars stories.

Iger dropped that tantaliser at the SCALE: The Future of Tech and Entertainment event in Los Angeles on Thursday. Iger's talk was witnessed and chronicled by entertainment industry bible Variety.

The “decade and a half” clock would start ticking after Star Wars Episode IX , currently scheduled to land in cinemas on May 24th, 2019.

Before then we'll get this year's Episode VIII: The Last Jedi and 2018's as-yet-unnamed Han Solo flick. Iger said that effort will cover the roguish pilot's life from the ages of 18 to 24. The Register hopes Disney to come up with a snappier title than Han Solo: Young Adult. Iger's hints about the story sound intriguing: we'll learn how Solo and wookie pal Chewbacca met and teamed up, plus discover the provenance of "a certain vehicle" - presumably the Millennium Falcon. Iger also said the origin of Solo's name will be revealed.

The CEO also said that recently-departed actor Carrie Fisher will not be digitally resurrected in The Last Jedi and that the scenes that she shot and the film's plot will remain unaltered. ®

HPEeeeeek! Our sales have been decimated by worldwide slowdown, trade wars, say execs

OpenWorld Does he mean some farm boy with just womp rat experience can destroy the whole thing?

R2D2 delivery robots to scurry through the streets of San Francisco

Have the makers SEEN the rates of street crime here?