If you were cuffed during Trump's inauguration, cops are trying to crack your smartphone

More than 100 mobes will only take a week to access 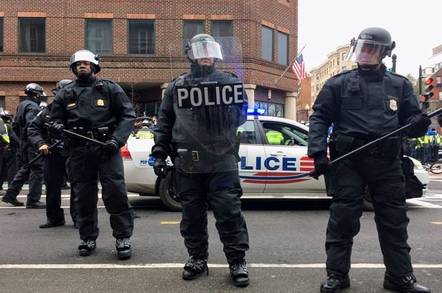 Vid The inauguration of President Donald Trump in the US capital was marked by protests, with cops collaring more than 200 people on the day. Now court documents reveal the US government's efforts to crack the arrestees' locked phones and slurp their contents.

The filings [PDF] – submitted to the Washington DC Superior Court – state that about 230 alleged rioters were cuffed on January 20 amid public outcry that caused over $100,000 in damage – and gave Alt-Reich campaigner Richard Spencer a sore jaw.

On Wednesday this week, prosecutors said they seized more than 100 locked cellphones, and claim that these will be accessed and searched.

"The government is in the process of extracting information from the rioters' cellphones pursuant to lawfully issued search warrants, and expects to be in a position to produce all of the data from the searched rioter cellphones in the next several weeks," the filing reads.

"All of the rioter cellphones were locked, which requires more time-sensitive efforts to try and obtain the data."

The papers don't say how the police expect to be able to crack that many phones in such a short period of time, but it's to be assumed that many are not the most current models with security mechanisms that thwart data extraction while locked. Nevertheless, it's an ambitious target.

It may be that arrestees were forced to unlock their phones using fingerprints which, in the eyes of the law, can be required. Passcodes, however, are considered intellectual property of a kind and are therefore covered by the Fifth Amendment's protection.

Once the phones have had their data slurped, the contents will be put online on the Department of Justice's cloud-based file-sharing platform called USAfx, which it claims is secure. Defense attorneys can then access the data while preparing for their clients' court cases.

The US government is also planning [PDF] to conduct the trials en masse to save time. It has split the accused into four groups, ranging in size from a dozen to 138 defendants. Defense teams are complaining that this would deny individuals the trials they deserve.

We'll have to wait until the trials start before we get an inkling of the methods used to break that many phones, if indeed the tools will be disclosed. As we've seen in the FBI's case, sometimes law enforcement is willing to abandon a trial rather than reveal its methods. ®