Lloyds Banking Group to hang up on call centre staffers

95 people at risk so far 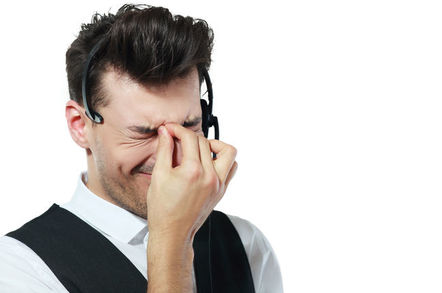 No sir, I don't need your PIN. I don't... Hang on, I just got an email from corporate. Pic: Shutterstock

Call centre staff at Lloyds Banking Group (LBG) are to be axed in the latest expenses purge, company insiders have told us.

El Reg understands 95 people based at the Pendeford Business Park in Wolverhampton have been put at risk of redundancy. Pendeford is one of nine call centres the bank operates across the UK.

Sources told us the roles are to be offshored to India and that some staff had actually helped to train their replacements. LBG refused to comment on this.

The call centre decision is part of a wider multi-year strategy that involved the closure of 2,000 branches, and 9,000 redundancies across the group, including 640 in the tech team, the latter being confirmed last summer.

LBG is also outsourcing the tech function to IBM as it tries to embrace the cloud - HPE nearly won the deal but senior management at the bank were concerned about the imminent split of the Enterprise Services business and the stability and changing leadership, Lloyds Trade Union said last week.

Some 1,961 staff will be TUPE’d to IBM including permanent staff, contractors, third parties and offshore suppliers, the union revealed.

Over a four-year period the majority of the work will be offshored, and just 193 of those walking across to IBM “will be working on the LBG contracts,” LTU added.

Windows, Unix, Linux and IBM i-Series platforms comprise the bulk of the estate being outsourced. This will include 2,000 of the 3,200 applications currently used by the bank.

The seven-year contract, approved by Unite and Accord unions, is said to be worth £1.3bn with expected savings of £759m for LBG on a cash basis. As we exclusively revealed, IBM will take on the management of the group’s data centres. The agreement is to be financed within the deal structure, said LTU.

“This is a calculated and cynical manipulation of the TUPE transfer arrangements by both the bank and IBM and will be opposed by LTU,” said Mark Brown, general secretary at LTU, which is not recognised by LBG.

One worker told The Register that LBG historically offered decent redundancy terms. “The inside knowledge that was passed on from IBM is that 95 per cent of all those tipped over will face redundancy in phases”.

This is of course presuming that target migrations to the cloud are met.

“The bank is still banging on about ethics and values and behaviours but clearly those at the top don’t demonstrate this. Any organisation with real ethics would at least offer its current VR package,” the LBG insider said.

LBG refused to comment on the call centre job cuts but reiterated its statement about “considering options to extend use of cloud technology in pursuit of the group’s aim to be the best bank for customers”.

The company was hit by multiple outages in January and DDoS was the prime suspect for the blackout. ®