Plus: Rubber-ducky rock may split in half one day 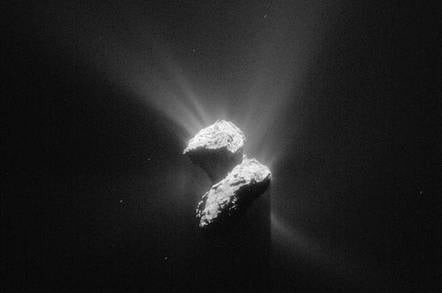 Pics Scientists have seen a landslide on a comet for the first time ever, it was announced on Tuesday.

Images captured by the Rosetta space probe show a 134-metre (439-foot) cliff – nicknamed Aswan – on the surface of Comet 67P/Churyumov–Gerasimenko crumbling away to reveal the spotless icy interior hiding under its surface.

The European Space Agency’s Rosetta spacecraft orbited the rubber-duck-shaped comet for two years, before it was ordered to crash gently into the comet’s dark depths in 2016. Now boffins are poring over photos from the probe, and were stunned to see snaps of the cosmic landslide.

Scientists had observed outbursts of material ejected violently from the comet’s nucleus frequently during the mission. But a study published in Nature Astronomy on Tuesday reveals the first time an eruption has been definitively linked to a collapse of a rocky ridge.

Close-up snaps taken in September 2014 show a 70-metre (229-foot) long, one-metre (3.28-foot) wide crack on the cliff edge. Aswan is located in the Seth region of the comet – a corner of the main body of the comet. 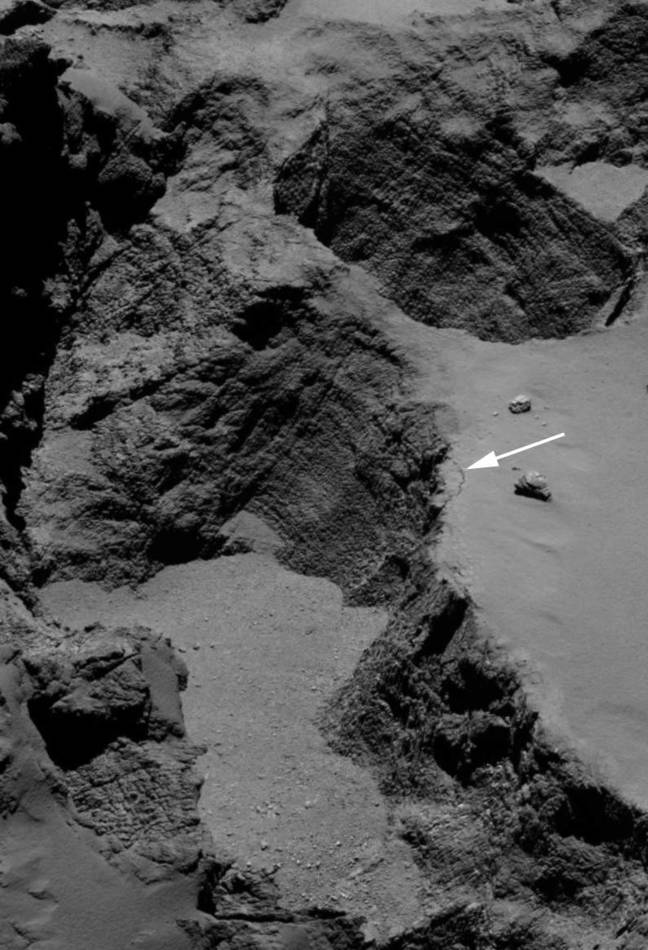 As the comet shuffled along its orbit, getting closer to the Sun, it was warmed by the Sun’s rays. Its icy interior began vaporizing at an increased rate, pulling more dust from its surface out into space.

The fireworks of dust and gas can be seen clearly in many images taken by Rosetta’s OSIRIS and Navigation cameras. One particular picture taken on July 10, 2015 was traced back to the Seth region. Zooming in on the area, researchers found a large fracture in the face of the Aswan cliff and many large boulders arranged around its base. 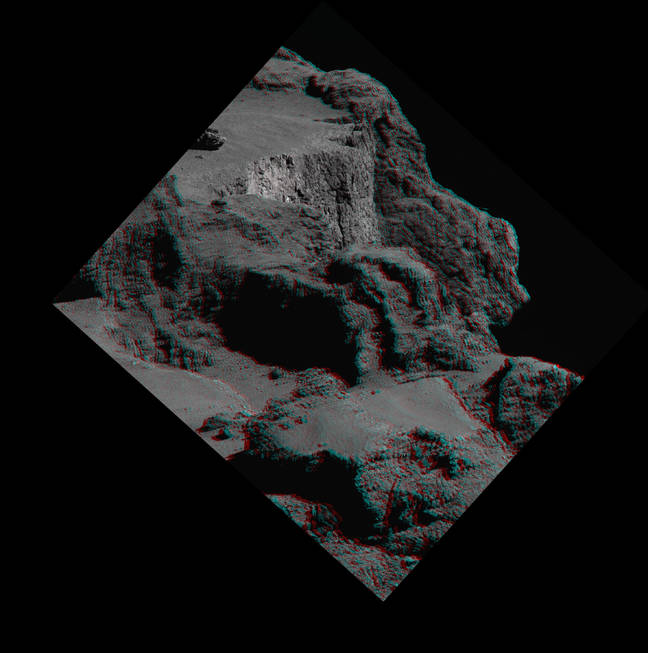 “The last time we saw the fracture intact was on 4 July, and in the absence of any other outburst events recorded in the following ten-day period, this is the most compelling evidence that we have that the observed outburst was directly linked to the collapse of the cliff,” said Maurizio Pajola, a researcher at the University of Padova, who led the study.

The landslide exposed a layer of ice which was estimated to be at least six times brighter than the overall sooty surface of the comet. The brightness faded by half by December as the water-ice vaporized away. By August 2016, a year after the landslide, most of the new cliff edge had faded back to its original color.

As the first mission to orbit and land on a comet, all eyes were on Rosetta. But it wasn’t exactly a smooth journey. Launched in 2004, it took Rosetta a decade and gravity assists from four planetary flybys to get the mothership into the comet’s orbit.

Its probe, Philae, successfully plopped on the surface, but the failure of its anchoring harpoons caused the lander to bounce around before landing in an unfortunate spot of shade. Receiving little sunshine, its batteries quickly drained dry.

Repeated attempts by ESA scientists trying to establish communication with the probe failed – although it did manage to send back close-ups of the comet’s surface as it descended.

Philae briefly flickered back to life as the comet neared its closest approach to the Sun in June 2015, sending back a second burst of data – before operations were permanently shut down in July of that year.

Luckily, the science payload could continue with Rosetta. Evidence of the comet’s landslide joins a list of notable discoveries, including mysterious sinkholes covering its porous surface, it’s rich in hydrocarbons, and a high ratio of deuterium to hydrogen in its water – making it unlikely that a floating rock like Comet 67P passed water to Earth.

Meanwhile, a separate NASA-led study published Tuesday in Science confirms Comet 67P was "was a very active place - full of growing fractures, collapsing cliffs and massive rolling boulders". There's even a big crack in the neck of the comet that is growing, threatening to break the structure in half.

"We saw a massive cliff collapse and a large crack in the neck of the comet get bigger and bigger," said Ramy El-Maarry, leader of the study and researcher from the US Rosetta science team from the University of Colorado, USA.

"The crack was extending – indicating that the comet may split up one day. And we discovered that boulders the size of a large truck could be moved across the comet's surface a distance as long as one-and-a-half football fields." ®