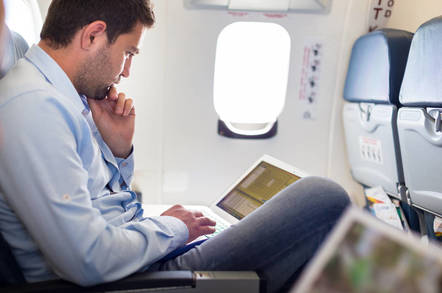 The UK has banned airline passengers on direct inbound flights from six countries in the Middle East and North Africa from taking a range of electronic devices into the cabin due to fears of a terrorist attack.

The decision, which mirrors a ban by the US Homeland Security from today and which was also based on intelligence that radicals are allegedly targeting flights, is being relayed to UK and foreign carriers.

“The safety of the travelling public is our highest priority,” a UK Government spokesman told The Register. “That is why we keep our aviation security under constant review and put in place measures we believe are necessary, effective and proportionate.”

Under the arrangement, any phones, laptops or tablets larger than a “normal sized mobile or smart phone” – 16cm (6.3in) length, 9.3cm (3.6in) width and a depth of 1.5cm (0.6in) – will need to be placed in hold luggage and checked in before a passenger goes through central security.

Inbound direct flights to the UK from Turkey, Lebanon, Jordan, Egypt, Tunisia and Saudi Arabia will be impacted by the restriction. Note that this, curiously, differs slightly from the countries hit by the US ban.

“The additional security measures may cause some disruption for passengers and flights, and we understand the frustration that will cause, but our top priority will always be to maintain the safety of British nationals,” the UK Government spokesman said.

He added the British authorities had been in “close touch” with their US counterparts to get a handle on their position.

The restrictions in the US also cover DVD and game players, as well as cameras. Cellular phones and medical devices are exempt.

The US administration voiced concern about ongoing threats to commercial aviation, using the Russian plane that was downed in Egypt and one in Somalia as cause for concern, along with the attacks at airports in Belgium and Istanbul.

El Reg asked the UK Government to detail when the ban starts and ends and we will update the story when we hear from them. ®