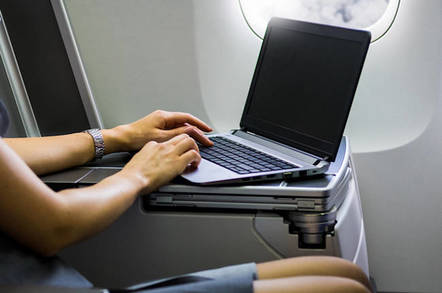 Updated Fears of terrorists smuggling bombs disguised as laptops onto airplanes has triggered a fresh crackdown on carry-on luggage.

From today, passengers are banned from flying into the US from specific overseas airports if their carry-on luggage contains any devices larger than a mobile phone. The clampdown – introduced by American security officials – is a result of counterterrorism intelligence that suggests mass killers are trying to slip explosives into airplanes, it is claimed.

Electronic gadgets bigger than smartphones – such as laptops and tablets – must be left behind, or stowed in the hold, if you're arriving from one of the listed airports. Presumably these alleged bombs are rigged to explode by hand, rather than by a timer, otherwise there's not much point stashing them under the cabin.

News of the device ban broke on Monday although details were scant. Now senior US Homeland Security officials, who asked not to be named, have told The Register the rules follow fresh "evaluated intelligence." This intel points to terrorists targeting flights using bombs hidden in electronic devices, we're told. Specific details about any possible threats were not provided.

These latest restrictions, which do not have a set end date and do not apply to crew members, were characterized as necessary to enhance security at specific airports. The rules do not, therefore, apply to internal flights in America, and only apply to non-US carriers. Cellular phones and essential medical devices are exempt. Laptops, tablets, cameras, DVD players, and game players are among the types of electronic devices no longer allowed in airplane cabins.

Royal Jordanian Airlines jumped the gun on Monday by advising passengers via Facebook that "carrying any electronic or electrical device on board in the flight cabins is strictly forbidden." The carrier said the new rules will be enforced on Tuesday, March 21, 2017. A staffer reached by phone yesterday confirmed the ban. "We received an email from the TSA," the worker told El Reg.

Saudi Arabia's Saudia Airlines has also acknowledged the ban with a notice to passengers that specifically mentions Kindles and iPads, as well as laptops. The affected airlines were given 96 hours to get up to speed with the new policy. ®

The UK has joined the US ban, applying similar device restrictions to flights into Blighty from all airports in these six countries: Turkey, Lebanon, Jordan, Egypt, Tunisia and Saudi Arabia. Curiously, this list of nations is not quite the same as the countries listed by US officials.

"The US Government is concerned about terrorists' ongoing interest in targeting commercial aviation, including transportation hubs over the past two years, as evidenced by the 2015 airliner downing in Egypt, the 2016 attempted airliner downing in Somalia, and the 2016 armed attacks against airports in Brussels and Istanbul," the document states.

That padlock on your bag? Easy to open by anyone now

TSA to pull backscatter perv scanners from US airports