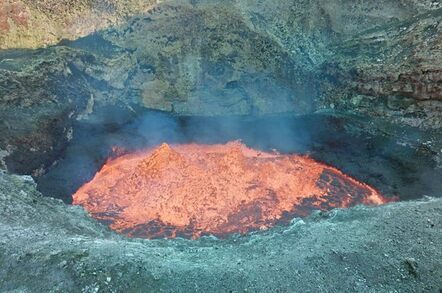 Honey? I'm pretty sure we should have turned right, not left. Marum Crater, Vanuatu, as depicted on Google Maps' Street View

Google Maps' Street View can now show you the interior of an active volcano, complete with bubbling lava lake.

This one's a feature, not a bug like Apple Maps' mistake that put a town of 30,000 people in the middle of a desert or Bing Maps' use of bad data from Wikipedia that led it to put a city of four million souls in the wrong hemisphere, and therefore in the middle of an ocean.

Google's decided it is simply fun to offer us all a view of Marum Crater, one of two lava lakes in the volcano that dominates the island of Ambrym in the Pacific nation of Vanuatu.

The Alphabet subsidiary tells us that two chaps rappelled 400 meters down into the crater while schlepping a “Street View Trekker”, Google's backpack-mounted image-recorder.

The results can be viewed here. The Register recommends looking upwards: you'll quickly see the lava lake is a long way down inside the caldera and perhaps imagine the forces unleashed when the steep cliffs were created.

For what it's worth, we tried using Google Maps to plot a route from Vulture South to the crater and it obliged, but not with enough detail for a “Honey, are you sure we should be heading for the lava lake?” moment. ®