NetSuite-nourished Oracle: SaaS margins will go up to 80% 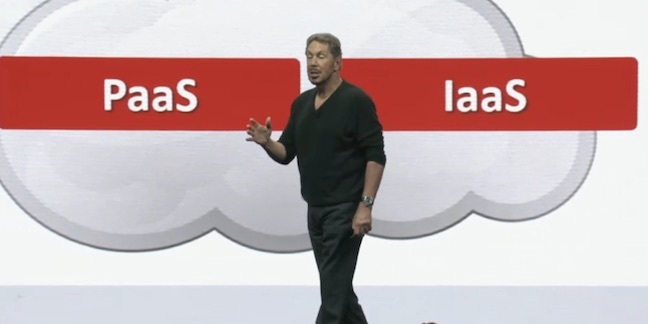 Oracle thinks it's done the hard work as it transitions to become a cloud company and is now poised to convert swathes of its customers from software licences to SaaS and infrastructure-as-a-service subscriptions.

So said Co-CEO Safra Catz on the company's third quarter earnings on Wednesday, during which she said “Our pivot to the cloud is now clearly in full strength” because, in part, “the increase in revenue from our cloud business has overtaken new software license business decline on an annual basis.” Licenses declined by almost sixteen per cent in the quarter.

Catz, fellow CEO Mark Hurd and founder Larry Ellison revealed quarterly revenues of US$9.2 billion, operating income of $3.0 billion and Operating Margin of 32 per cent. Net income hit $2.24 billion, or 53 cents per share. Everything's up a point or three compared to the same quarter last year, other than cloud-related revenues.

Those are up 86 per cent compared to last year, with Cloud, SaaS, and PaaS revenues for the quarter hitting $1.1 billion. Infrastructure as a service revenue hit $178m, up 19 per cent.

Oracle expects those numbers to grow, along with margins.

“The Q3 gross margin for SaaS and PaaS was 65%, up from 51% last year, and I expect it to be about the same region in Q4,” Catz said. “I expect that our total Saas and PaaS gross margin will continue to trend toward 80% over time.”

So there we have it: cloud is going to be great for Oracle's bottom line. But the company thinks it will offer you great value that you'll happily pay for. “Many Oracle workloads now run ten times faster in the Oracle cloud versus the Amazon cloud,” Ellison said, adding that Oracle can run bigger instances of its database than other clouds and then claiming that “It also costs less to run Oracle workloads in the Oracle cloud than the Amazon cloud.”

Might that be because Oracle just doubled the price of its database on Amazon, Mr Ellison?

Whatever the reason, Ellison thinks there's a huge cloud swing coming because “hundreds of thousands of database customers … will move most of their databases and most of these workloads to the cloud.” He expects it will be Oracle that captures their business and indeed said several big deals are about to drop.

Ellison said “... some of our largest customers' are negotiating huge infrastructure as a service contracts to move all their databases to the Oracle cloud. You can expect some of those big deals to be announced in the coming weeks. “

The founder also says this quarter marked the first time Oracle recorded fast growth in its infrastructure-as-a-service products and puts that down to the quarter being “the first time we've ever had a technology lead” in the field.

The company therefore upgraded its guidance for its cloudy bits. Catz said “SaaS and PaaS revenue including NetSuite – already its highest-earning ERP line - is expected to grow 69% to 73%, effectively raising my full year guidance from 80% to 81% for the year.” She added that “IaaS is expected to grow 25% to 29%.”

Capital expenditures for the quarter $440m and “with about third of it from real estate, while most of the rest was cloud build out and internal use.” Which leaves about $290m, minus whatever was spent on “internal use.” That's hardly enough to build and populate a single data centre but Oracle has 69 billion in cash and marketable securities, or about $5bn to hand net of debt, so won't struggle to find funds.

Ellison finished his prepared remarks by saying “In summary, all of Oracle's cloud businesses are growing rapidly and IaaS will be leading the way in the future. Thanks.”

Markets welcomed the results, as they beat revenue guidance, sending shares up 2.5 per cent after the bell, to $45.60 at the time of writing. ®

HR and finance cloud vendor focuses on its own apps