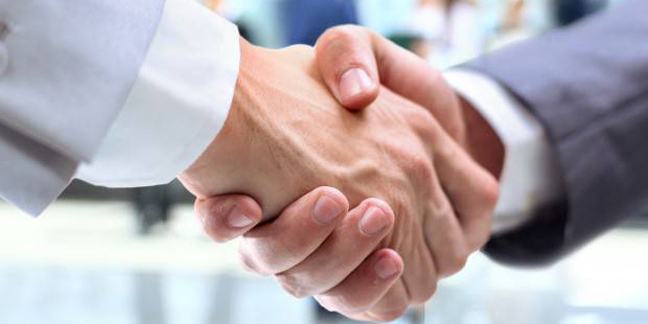 Exclusive A corporate tie up between Vodafone UK and Liberty Global is back on the negotiating table, multiple sources have told The Register.

The fourth floor of Voda’s Newbury HQ has been sealed off with access only granted to execs from both firms, insiders claimed. Andrea Salvato, SVP and chief development officer at Liberty Global, is leading discussions for his company, a source added.

"Only certain high-level members of staff are permitted access. Visitors are permitted but only from Liberty Global," a company insider told us.

In January, the pair completed a merger in the Netherlands to form a $3.7bn joint venture. A similar deal could be struck in Britain, although a very well-placed person told us Vodafone may decide to sell its UK operations to Liberty. In turn, Liberty – the US cable king that owns UK ISP Virgin Media – may sell its German arm to Voda.

Talks between Liberty and Voda UK began in 2015 but didn’t lead to a wider sale or collaboration at group level.

“If Europe wants the creation of real alternatives to incumbents, Vodafone and Liberty are the only two guys in town,” Colao explained.

Analysts say that mobile phone network Vodafone has been left behind in the scramble for content rights and multiplay consumer offerings. Liberty doesn’t have a mobile business in the UK, and Vodafone is far behind in multiplay.

"Vodafone are clearly on the back foot in the UK," CCS Insight analyst Kester Mann told El Reg.

"Vodafone is making a move into into multiplay, but it’s not made much progress there at all. Liberty is really after the mobile customers, the branding and the assets."

Our sources also confirmed that Vodafone’s Pay TV plans have been put on hold. The project had suffered delays but only last month, Vodafone's exec Colao insisted a launch was “weeks” away.

Mann at CCS said a deal with Liberty would be "emotive", given Vodafone's UK heritage.