It's on by default, right now, with extra love for Outlook and SharePoint 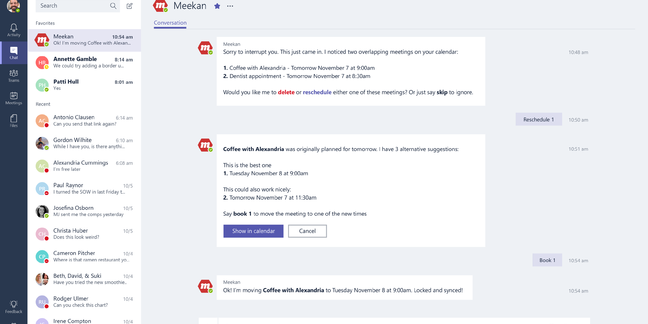 Redmond revealed Teams last November and at the time we remarked upon its uncanny resemblance to Unicorn-grade collaborationware Slack. Our very own Adam Fowler later opined that Slack and Teams “will likely entice two different groups with little overlap.” But he also pointed out that all of Office 365 costs about the same as just Slack. And Teams is now just another feature of Office 365 and it is on by default for commercial customers.

Making comparisons even more interesting is that a few new features have made it into Teams since the November preview, such as public teams that go beyond an organisation's walls.

Microsoft's spent years encouraging organisations to use Outlook as One Messaging App To Rule Them All. Teams isn't immune to that: you can now send email from Outlook and have it appear in a Teams thread. SharePoint's not been forgotten either: its file store is now a Tab in Teams.

Teams is software-as-a-service and Microsoft promises ongoing evolution. For starters, Microsoft says we can expect more integration with third-party software vendors so that their apps can pipe messages into Teams and information can flow both ways.

When Teams debuted as a preview, Slack bought a page in The New York Times and devoted it to an Open Letter that read, in part, “Welcome, Microsoft, to the revolution. We’re glad you’re going to be helping us define this new product category.” That letter was widely felt to have legitimised Teams as a competitor and not to have been a good idea.

Today, so far as El Reg can divine, Slack is silent: not a Tweet or blog post has escaped its offices.

Spare a thought, too, for HipChat. Atlassian acquired it in 2012 and in 2015 tried to make it more like Slack, at least with regard to third-party integrations. Since Teams' late 2016 debut the market's been framed as Microsoft vs. Slack.

They'll go the way of Domino in the end, anyway. ®

It's not you, it's Slack: Chat app falls down – and at such a very convenient moment

It's the wobbly Microsoft service sweepstake! If you have 'Teams', you've won a lifetime Slack sub

Just kidding, no one deserves that. But you'd be right