But will it work? We're about to find out 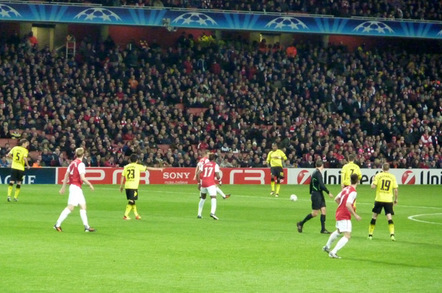 Analysis Last week in the High Court, Justice Arnold agreed to a request from the Football Association and the Premier League, and supported by the BBC, amongst others, that broke new ground, technically and legally.

The order, which has the support of the major UK ISPs, is unusual in several ways. It permits the ISPs to block access to servers (such as those accessed by third-party software addons), rather than a website.

The blocking occurs in real-time, for a few minutes at a time: the duration of a football match. And the order expires in May - when the English football season ends.

It’s also the first time the major ISPs here have agreed to an extension of content-blocking without a fight: BT/EE, Sky and Virgin Media approved the request, and TalkTalk and BT’s PlusNet did not contest the request.

BT, of course, has spent heavily on football rights in recent years, while Virgin Media carries both Sky and BT’s services as pay TV options. Between them, Sky and BT spent £5.1bn in the most recent English Premier League auction in 2015, on top of the £3bn they spent in 2012.

At £10m per Premier League game, the buyers are strongly incentivised not to see unlicensed streaming options, such as modified Kodi-based USB sticks, become more commonplace.

The actions requested by the Football Association and the Premier League (unfortunately abbreviated to "FAPL" in the judgement*), require ISPs to block addresses of upstream streaming servers used by plugins that allow access to retransmitted unlicensed content.

Justice Arnold noted that these new tools, rather than websites, were how unlicensed sports events were now distributed:

The skill and effort required to find and use such devices and apps to access infringing content has fallen dramatically. Devices such as set-top boxes and media players are easy to connect to domestic televisions. Software to access suitable streams (in particular, software known as Kodi together with third-party add-ons) has become much easier to find and install. Indeed, it is increasingly easy to purchase set-top boxes and other devices which are already loaded with such software. Moreover, sources of infringing content often update automatically.

Arnold was convinced of the argument for harm from this:

“There is increasing evidence of football fans turning to streaming devices which access infringing streams as a substitute for paid subscriptions to services such as those offered by Sky and BT. This undermines the value of FAPL’s rights and, if unchecked, is likely to reduce the revenue returned by FAPL to football clubs, sports facilities and the wider sporting community,” he noted, along with evidence that live attendances fall too.

In addition, the offshore operators ignore infringement notifications. Arnold cited academic evidence suggesting that blocking does seem to work. (At least for now)

Both the ISPs and the football industry requested confidentiality in exactly how the real-time blocking would be implemented. The Court saw the criteria for inclusion of the blocking order, but for the public, this remains under wraps in Confidential Schedule 3 of the order.

However, bleating about infringement is not sufficient to persuade a Court, a judge has to balance rights: the public’s right to exchange information, and the ISPs right to carry on a business, and so ensure the measures requested are proportionate.

The orders would not require the Defendants to acquire new technology: they have (or are in process of acquiring) the requisite technology already. The main effect of the Orders would be to impose additional operating costs on the Defendants. There is a small risk of the Defendants being attacked either by hackers or by operators of the Target Servers, but in my judgment this risk is not a significant one. It is also true that there is a risk of reputational damage to the Defendants, particularly in the event of overblocking, but again I do not consider this risk a significant one. Overall, as counsel for FAPL submitted, the fact that five of the Defendants positively support the making of the Order is strong evidence that it will not impair their freedom to carry on business.

Arnold also noted that “monitoring and blocking techniques employed by FAPL and the Defendants respectively have improved considerably since earlier blocking orders were made, in some instances because of improved automation and in other instances because of the investment of manual resources to carry out blocking at the relevant times. This makes it feasible to identify and block Target Servers much more rapidly than before, leading to the prevention of an even greater proportion of potential infringements.”

Importantly, Arnold concluded from expert evidence presented to him that the streaming servers FAPL wanted to target during games were not used for any other purpose than infringement: “As for the freedom of internet users to impart or receive information, this plainly does not extend to a right to engage in copyright infringement. Since the Target Servers appear to be exclusively, or almost exclusively, engaged in infringing activity, at least during the periods in which the Order will take effect, the operators have no right which requires protection.”

The order goes into effect on Saturday, and lasts until May 22.

“The short duration of the order is intended to enable an assessment of its effectiveness, and of any issues encountered, with a view to FAPL applying for a similar order to cover the 2017/2018 season, with any changes that may seem appropriate in the light of this season’s experience,” said Arnold.

Arnold has adjudicated previous cases over web blocking, including the landmark Newbinz2 case, (blocks for The Pirate Bay and other sites followed in 2012), and the 2014 Cartier decision, which extended blocking to trademark infringers. The lack of fightback over the Order contrasts with that of a few years ago, when BT and TalkTalk spent over £1m contesting web-blocking proposals in the 2010 Digital Economy Act.

We’ll have a chance to judge how effective it is very soon, though. ®

The order was supported by the BBC, other broadcasters, and sports bodies for golf and rugby.