Blast from the past: Mass birth of early supermassive black holes explained at last 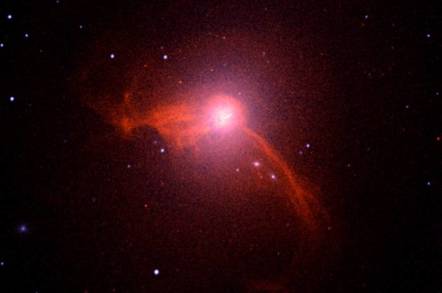 The earliest supermassive black holes have always puzzled astronomers. These ancient voids – about a billion times the mass of the Sun – were discovered more than a decade ago and formed only 800,000 years after the Big Bang.

It should take millions of years for black holes to accumulate that much mass, so finding these giants that formed at such at early stage in the universe was a surprise.

A paper published in Nature Astronomy shows scientists may be one step closer to figuring out how these objects grew so quickly.

“The collapse of the galaxy and the formation of a million-solar-mass black hole takes 100,000 years – a blip in cosmic time,” said Zoltan Haiman, co-author of the study and astronomy professor at Columbia University. “A few hundred million years later, it has grown into a billion-solar-mass supermassive black hole. This is much faster than we expected.”

Researchers from Dublin City University, Ireland, Columbia University, US, Georgia Institute of Technology, US, and the University of Helsinki, Finland, believe the problem boils down to radiation.

The clumping of gas to form denser pockets of material in a galaxy is the first stage of star formation. Since this process is halted by radiation, the birth of stars is impossible.

It’s an important requirement to create the right conditions for supermassive black holes to thrive. If mass from the surrounding gas is locked away in stars far away from the black hole, then it can't be gobbled up and there is less chance of the black hole reaching billions of solar masses.

A previous study in 2008 led by Haiman and his colleagues found that a surge of radiation could split molecular hydrogen (H2) into atomic hydrogen (H) and cause a black hole and its host galaxy to collapse without generating new stars.

But that’s not the only factor needed to explain the presence of these behemoths. Another previous paper led by Eli Visbal, co-author of the current study and researcher at Columbia University, calculated that the neighbor galaxy would have to be at least 100 million times more massive than the Sun to emit enough radiation to prevent star formation in the host galaxy.

Giant galaxies of that size are relatively rare. But in the early epochs of the universe, they must have existed, the researchers argue.

The theory of how supermassive black holes grew so early may not be as far-fetched, as the latest simulations show the radiation-emitting galaxies don’t have to be as large as previously estimated.

They can be smaller and closer to the host galaxy. But “the nearby galaxy can’t be too close or too far away, and like the Goldilocks principle, too hot or too cold,” said John Wise, co-author of the paper and an associate astrophysics professor at Georgia Institute of Technology.

Other theories that could explain supermassive black holes include galaxies merging with one another. The merger theory has a growing body of evidence, as the collision of galaxies is quite common, especially in clusters. The Andromeda galaxy is hurtling towards the Milky Way and is predicted to collide in about four billion years.

But both theories still need further testing. Researchers hope to test their theory when NASA’s James Webb Space Telescope is launched next year.

“Understanding how supermassive black holes form tells us how galaxies, including our own, form and evolve, and ultimately, tells us more about the universe in which we live,” said John Regan, lead author of the study and a postdoctoral researcher at Dublin City University. ®

Thousands of them lie hidden in the dark secretly guzzling gas