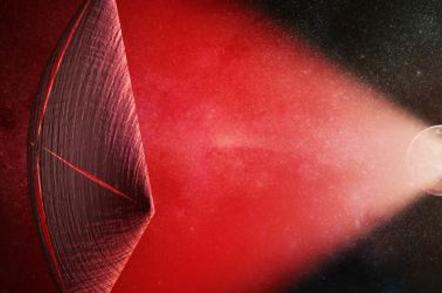 Illustration of a light-sail powered by a radio beam (red) generated on the surface of a planet: from the paper. Pic: M Weiss/CfA

Astrophysicists think that mysterious short millisecond-long blip of radiation may be distant aliens powering up their sailcraft. Over 20 such FRBs (fast radio bursts) have been detected since 2007.

Avi Loeb of the Harvard-Smithsonian Center for Astrophysics speculates that the mysterious bursts could be powering interstellar payloads: sending interstellar craft along a light beam. As Freeman Dyson told us in 2015, this is a plausible means of propulsion.

“What makes a huge difference if you really want to go fast is have a big laser in space, and ride the beam. The beam will supply the energy and you don't have to carry it with you. It's essentially a public highway system with the laser beam as the highway, and little ships with sails. That works and doesn't involve any new physics,” Dyson told us.

Such a project, albeit on a small scale, is being advanced by Professor Stephen Hawking and Yuri Milner in the Breakthrough Starshot project. Using a light powered sail to accelerate nano craft to speeds up to 161 million km/h (100 million mph). NASA physicist Philip Lubin published a paper on photonics drives last year.

Loeb speculates that the energy required to generate an FRB would be the equivalent of sunlight falling on an area of a planet twice the size of the Earth - the capturing of which would be a far from trivial engineering exercise. But this would then power a payload of a million tonnes.

You can peruse the calculations by Loeb and co-author Manasvi Lingam here. ®

* Full image credit for pic above: An artist's illustration of a light-sail powered by a radio beam (red) generated on the surface of a planet. The leakage from such beams as they sweep across the sky would appear as Fast Radio Bursts (FRBs), similar to the new population of sources that was discovered recently at cosmological distances. Pic credit: M. Weiss/CfA