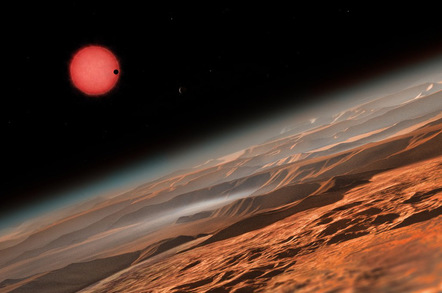 Astronomers and the astro-curious but software-savvy will be hovering over a download link waiting for midday Tuesday (US Eastern Time), when Kepler data for the TRAPPIST-1 system is published.

If you managed to sleep through this year's biggest astronomy excitement so far: TRAPPIST-1 set a record for exoplanet discovery. Observations made first by the Spitzer space telescope turned up seven Earth-sized planets whizzing around a star 44 light years from us, and the Kepler K2 mission took part in the follow-up.

At this stage, what's being released is the K2 mission's raw cadence files, to land at MAST (the Barbara A Mikulski Archive for Space Telescopes).

It's not for the faint-hearted. The raw pixel data has a year-day-hour-minute-second timestamp identifying when a shot was taken, and to keep the file size manageable, only pixels of interest are in the files (excluding, for example, the backgrounds). That's about three per cent of what Kepler's 95 megapixel camera catches.

So what can you do with it? Nothing, until you place the pixels, but that's handled by the Python-based and open-source Kadenza K2 Cadence Data Reader. This maps the cadence data against the coordinates of each pixel, using this pixel mapping reference file.

With that in place – and with suitable astronomical chops among users – the MAST crew hope to get new insights into TRAPPIST-1 from the crowd, into stuff like transit times and duration.

The patient among you can wait until June, when calibrated light curves and target pixel files will follow at MAST.

At 44 light years' distance, the TRAPPIST-1 system is a near neighbour. It's got three planets considered to be within the habitable zone, all of which (as well as the other four) are so close they're tidally-locked, always showing one side to their star. Which will make for some terrific holiday spots.

The international group of boffins that identified the exoplanets are confident that those in the habitable zone have liquid water, and the others may well do if the atmospheric conditions are right. ®

Keep your wig on, Ziggy. This is about erosion features. Not our new arachnid overlords