But they should expect a discharge or worse, not medals 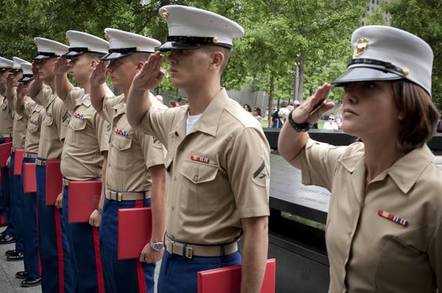 The US Marine Corps is investigating how compromising photos of some of its female members came to be shared on Facebook and Google Drive by fellow marines.

In January, a closed Facebook group called Marines United was plastered with photos of partially clothed or naked female members of the Corps, along with their names, ranks and serial numbers in some cases, plus lewd comments about their looks. The pics were spotted by former Marine Thomas Brennan, who runs The War Horse, a non-profit blog. His story was published by the Center for Investigative Reporting.

"The Marine Corps is deeply concerned about allegations regarding the derogatory online comments and sharing of salacious photographs in Marines United, a closed website," said a USMC spokesman on Sunday.

"This behavior destroys morale, erodes trust and degrades the individual. The Marine Corps does not condone this sort of behavior, which undermines its core values. Allegations of misconduct are thoroughly investigated and handled at the appropriate judicial or administrative forum."

According to Brennan, more than two dozen active and retired female members of the USMC were exposed on the Facebook forum and via a Google Drive account. When he alerted the USMC, the postings were taken down, and a former Marine, now a civilian contractor, was identified as the source and was fired.

That didn't stop the leaks: in February, more images were shared to the thousands of members in the Facebook group, and were accompanied by more than 2,500 crude comments. A Marine identified as the source of at least some of the images was discharged from the Corps. An internal investigation continues.

One victim, a corporal in uniform who was photographed at Camp Lejeune, North Carolina, told The War Horse she was very concerned, not only by the breach of privacy but also by what this could do to her military career. We're told whoever took the snap was standing right by her.

"He was standing close enough to smell my perfume," she said. "This is going to follow me – just like he did."

Both the Chairman of the House Armed Services Committee, Representative Mac Thornberry (R-TX), and its ranking member Representative Adam Smith, (D-WA) have called for a relentless probe into the case, with the latter calling the case "degrading, dangerous and completely unacceptable."

"The military men and women who proudly volunteer to serve their country should not have to deal with this kind of reprehensible conduct," he added.

The social media pages have since been shut down. Meanwhile, Brennan has been facing threats and abuse for uncovering the photo swapping, saying a bounty has been put out on pictures of his daughter.

"It has been suggested that my wife should be raped as a result of this, and people are openly suggesting I should be killed ... Can you imagine being one of the victims?" he told The Marine Corps Times.

"As a Marine veteran I stand by the code: honor, courage and commitment. This story was published with the intention of standing up for what is right and staying true to the leadership principle of looking out for Marines and their families." ®

Do Not Track is back in the US Senate. And this time it means business. As in, fining businesses that stalk you online