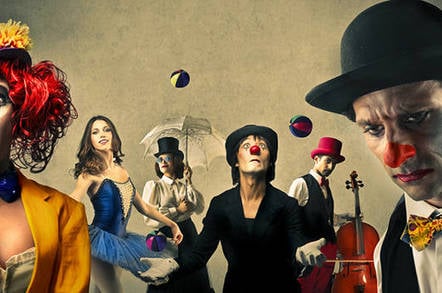 Analysis It's March again so it must be time for an annual checkup on the Internet Governance Forum – the United Nations body that is tasked with working through the complex social, technological and economic issues associated with a global communications network, and runs an annual conference to that end.

Around this time every year, the IGF's organizing group the Multistakeholder Advisory Group (MAG) meets in Geneva to decide how the annual conference will be structured and what topics it will cover, and to set the rules for how sessions and the conference itself will be run.

And we are pleased to announce for another year, the IGF remains a circus, an unaccountable and pointlessly bureaucratic organization that goes to great lengths to pretend it is open to everyone's input and even greater lengths to make sure it isn't.

At the two-day meeting, the IGF's three core issues again took pride of place at the event:

Let's take a look at each:

Last year, we had the unexpected last-minute coronation of former ISOC president Lynn St Amour as chair of the IGF, and a furore over the selection of members of the MAG which, it turned out, were not the ones that the constituent groups had selected, but rather the ones that bureaucrats based at UN headquarters in New York had chosen for them.

This year, a slight twist: the UN had decided not to replace two civil society members who had left the MAG. And it forgot to tell the civil society groups about it. They found out when the list of MAG members was posted.

Keeping with tradition, however, the IGF released this list just two days before the meeting was due to begin – sparking the exact same protests as last year, when some people were not able to drop everything at short notice to fly to Geneva.

The response was civil society followed suit by offering the same response it does every time it is disregarded by the organization: it wrote a strongly worded letter [PDF] in which it noted its "surprise and disappointment" – which will achieve absolutely nothing.

The UN also announced at the last minute that it decided to keep St Amour on as its MAG chair. It didn't provide any reason or rationale, but based on the history of the MAG it is fair to assume that she had not worried anyone in New York that she might use her second term to effect any reforms of the organization.

No one knows how or why the MAG and MAG chair decisions were made, or why they arrived so late – again – keeping with the forum's tradition of opaqueness.

Remarkably, however, there was movement on one of the most persistent criticisms of the organization: its finances.

Ever since its creation in 2006, there have been questions surrounding the forum's financing, particularly when that financing was repeatedly used to undermine the annual conference.

For nearly a year there was no MAG "executive coordinator," reportedly because the money was not available to pay them, even though a number of internet organizations actively offered to cover the cost. Another year, the annual conference was nearly cancelled due to a lack of funds.

For more than five years, the UN stymied efforts to fund the IGF independently by claiming bureaucratic complexities. It was only when a separate effort was set up – the misguided NetMundial Initiative – that the IGF felt sufficiently threatened to allow others to put in money and so have a voice in how things were run.

Fast forward two years and lots of additional pressure to be more transparent about its funding, and the IGF finally put out a document outlining the funding arrangements. It was hailed by one MAG member who has pushed for the additional accountability as "a long overdue step towards transparency."

The 12-page document is very long in terms of explanation and history, but it notes that "the project's overall budget which defines the funding requirements until 31 December 2025 is reflected in Annex 2" and "a two-year budget for 2017 and 2018 has been outlined in Annex 3."

Predictably, however, there is no Annex 2 or 3 in the document made public.

Bureaucratic blocking of any efforts at reform

Every year two things happen in terms of actual progress:

This year was no different.

Efforts to introduce reforms and improvements were first started in 2008. These were put off for two years until finally the UN relented and tasked a working group of the Commission on Science and Technology for Development (CSTD) to look into the issue.

Two years later, May 2012, the CSTD produced a report. Discussion of that was put off for another year until MAG members forced through its own working group in 2013 to consider the report and suggest changes. That group simply failed to meet the following year. When some MAG members tried to revive it in 2015 and again in 2016, they were told there wasn't sufficient time because of the tenth anniversary meeting of the World Summit on the Information Society (WSIS), where the IGF had first been formulated.

This year – more than five years since the delayed CSTD report was published – MAG members again pushed for a working group to look at improvements. And were told that they needed to wait for a "discussion paper" to be written by the IGF's chair and secretariat before they could decide on the best way to proceed – the same tactic used at least three times in the past decade to delay any discussion.

Still if it works, why go changing things?

What's in a name?

As for the conference title, every year the MAG's 50+ members spent at least three hours fighting over it and every year the end result was something of such mind-sapping mundanity that everyone wonders why they bothered to have the discussion in the first place.

The titles literally mean nothing and typically include terms like "sustainable," "development" and "growth," which can mean anything to anyone. Don't believe us? Here are the actual conference titles over the years:

It may be worth noting that the conference title has never had even the slightest impact on the actual conference sessions that are proposed or approved, making you wonder why every year the MAG gets together to waste its time.

And if you think the answer is because the IGF is obligated to hold MAG meetings but doesn't want to ever give its members the ability to direct the conference, you'd be right.

Regardless, we know you're just dying to know what this year's theme is. So here is it: "Shape your Digital Future." You see, worth every minute of discussion.

See you next year for more of the same. ®

France: Let's make the internet safer. America, Russia, China: Let's go with 'no' on that