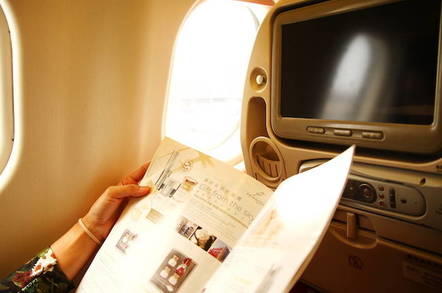 Panasonic has been hit with a lawsuit accusing the electronics giant of monopolizing the market for in-flight entertainment (IFE) devices with a series of dirty tricks.

Software maker CoKinetic says that Panasonic Avionics has been illegally rigging their in-flight entertainment hardware not to work with software provided by other developers. The suit claims these violations of US antitrust law cost CoKinetic serious cash.

According to CoKinetic, Panasonic has established itself as the dominant provider of the in-seat entertainment systems most airlines use and, in the process, is obligated to allow other vendors to access the hardware and run their own software for things like in-flight movies, food ordering, and shopping services.

Instead, the suit alleges, Panasonic's hardware has been deliberately set up to favor Panasonic's own IFE software. CoKinetic charges that, by design, the hardware will run non-Panasonic code slower and less reliably in an effort to push airlines to run Pana's own software packages.

If CoKinetic's claims are true, air passengers either get crippled third-party software for their in-flight entertainment, which sucks, or Panasonic-supplied software that has no competition, and thus faces little to no pressure to actually be any good, which sucks. CoKinetic claims its code is superior to Panasonic's, but the biz is effectively shut out.

"Unfortunately, Panasonic has also carried out a relentless campaign to maintain monopoly control over the software and media services used by airlines around the world to power their Panasonic IFE systems."

CoKinetic claims that Panasonic has provided a number of airlines, including Delta, Emirates, Virgin America, and United, with in-flight systems that would deliberately cripple competitors' products.

The suit [PDF], filed with the US District Court for Southern New York this week, seeks damages in excess of $100m against Panasonic for violations for the Sherman and Clayton antitrust acts, as well as violations of California and New York state laws.

Panasonic did not respond to a request for comment on the filing. The legal action comes as some airlines snub seat-back entertainment systems for Wi-Fi networks that stream videos and other stuff to tablets, phones and computers mid-flight. Still, CoKinetic thinks it's owed nine-figures, and is plowing on.

The suit comes as Panasonic Avionics has already been thrown into turmoil, thanks to the resignation of its CEO and CFO following the announcement that the US Securities and Exchange Commission and Department of Justice that the company was the subject of a Foreign Corrupt Practices Act probe.

The probe, announced early last month, focuses on possible bribery crimes between execs and foreign government officials. Panasonic Avionics has said it will cooperate with the investigation. ®