We'll try and sort it out by the end of the day, it says 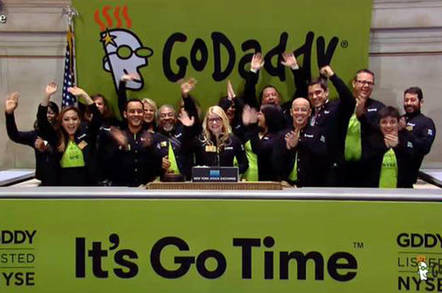 More like "go and fix your service" time, guys, am I right?

Despite a status page claims that all is green and healthy at registrar and web hosting business GoDaddy, customers have been complaining on Twitter, as well as to The Register, and to GoDaddy itself, that their domains are disappearing from DNS.

There is currently a 17-minute wait to get through to a customer service representative, although such representatives are confirming to El Reg readers that they are investigating the issue and hope to have a fix for it by the end of the day.

GoDaddy having serious DNS issues in the UK... Apparently up to 24 hours till they sort it.. 😬😩

# godaddy #goDaddyHelp Since yesterday your DNS's are down!!!! : connection timed out; no servers could be reached https://t.co/EOLxtwiYo3)

The outage follows GoDaddy's revoking thousands of SSL certificates back in January, after the firm unwittingly introduced the bug during a routine code change intended to improve its certificate issuance process. ®

Todd Redfoot, GoDaddy's chief information security officer, has been in touch to say: "Earlier this morning, we experienced a DDoS attack on some of our DNS servers that impacted a small number of customers' domains for approximately six hours. We apologize for the inconvenience. The issue has been resolved and service has been restored.”

Updated Appeals judge confirms: RPost will get nothing and like it