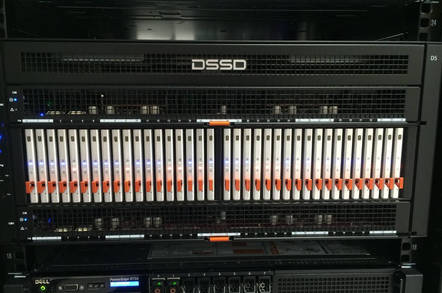 It will sprinkle the technology into its storage and platforms groups; that will, it is hoped, speed up applications on these systems by exploiting high-speed access to NVMe drives.

EMC bought DSSD in May 2014 for a suggested $1bn. Now Dell owns EMC. Now the DSSD D5 product line is being dismantled and scattered into other gear.

So Dell has decided to make a strategic pivot with its DSSD technology, because it’s convinced fast network access to NVMe storage will be vital in the future. Consequently it is going to bring the DSSD technology to its storage and its platforms, with people in the present DSSD team moving either to Jeff Boudreau’s Storage business unit or to SVP for platform and systems engineering Bill DePatie’s organization.

Any DSSD people leaving EMC will be treated respectfully, according to Grocott. He was not able to say what proportion of the DSSD team might be leaving Dell. It is also too early to say which of Jeff Boudreau’s storage products will embrace DSSD technology first. Grocott did say a storage array product using NVMe would be launched by the end of the year. El Reg suggests you take your pick from XtremIO, VMAX and Unity.

For DSSD people it must be a blow, to put it mildly, to see their standalone and much cared-for product baby meeting an abrupt end-of-life. EMC has not been reluctant to kill off under-performing products in the past and its ability to act decisively and quickly in this regard deserves respect.

We might imagine that Pure will be laughing, seeing the D5’s top-end limiter on Flash Blade going away. Likewise the NVMeF-type startups like Apeiron, Excelero, and Pavilion Data Systems – as well as the AFA vendors espousing NVMe drive NVMe fabric technology, such as Kaminario, Tegile and others – will be relieved as well.

The net-net is that the DSSD D4 product is no more, but the technology lives on and will be used to speed development of other server and platform products in Dell Technologies. ®

None of my flash rivals NVMe: Analyst spills tea on who's who in fabric-access NVMe arrays