And no, you can't use Stackoverflow and Google 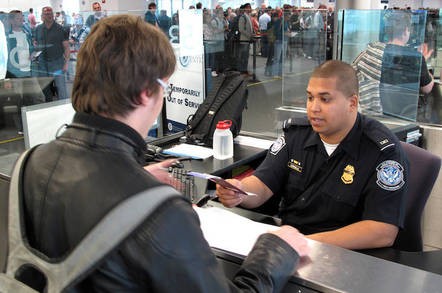 Analysis Amid the Trump administration's tough talk on immigration and executive orders calling for border barriers and immigration bans, recent anecdotes describing a more confrontational entry process among travelers arriving in the US appear to confirm expectations set by the President's rhetoric.

David Thornton, a software engineer from Sydney, Australia, reportedly was asked by a US Customs and Border Protection (CBP) officer agent to write code after landing at Newark airport, to establish his claimed competency.

And Microsoft engineer Marcin Juraszek in a tweet said on his last trip from Europe, a Delta agent at the Amsterdam airport asked him a series of questions about the programming languages he uses.

Plenty of software developers will admit they often have to hit up Google and Stackoveflow to remind them of function call parameters, loop syntax, namespace declarations, and other simple but easily forgettable stuff. A long Twitter thread of confessions by programmers along these lines developed late last week, in fact.

"Hello, my name is Tim. I'm a lead at Google with over 30 years of coding experience and I need to look up how to get the length of a Python string," tweeted Tim Dierks, who works on security at the ad giant, for example.

Writing out fiddly algorithms on paper at an airport while jet-lagged on demand to a border official is a task even highly experienced engineers will struggle with, we suggest.

Outside of technical interrogations, there have been accounts of other indignities. Last month, Muhammad Ali Jr, son of the late boxing legend, was reportedly questioned for two hours at the Fort Lauderdale-Hollywood International Airport, allegedly because his name sounded Muslim (a claim CBP denies).

Argentinian art gallery owner Juan Garcia Mosqueda, who has lived and worked legally in the US for a decade, was turned away when trying to reenter the US last week. And NASA scientist Sidd Bikkannavar was reportedly forced to surrender his phone to be searched by border agents.

According to the CBP, nothing has changed recently in the way that the agency approaches its responsibilities. "It is business as usual," a CBP spokesperson claimed in an email to The Register.

The agency's spokesperson said CBP knows how important the travel and tourism industry is to the US economy, and remains committed to enabling lawful travel. "CBP officers are thoroughly trained on admissibility factors and the Immigration and Nationality Act which broadly governs the admissibility and inadmissibility of travelers into the United States."

While noting that travelers must possess valid travel documents, the CBP spokesperson said that possession of a visa or visa waiver does not guarantee entry into the US.

"As the agency charged with determining admissibility of aliens at ports of entry, under US immigration law [Section 291 of the INA [8 USC 1361]] applicants for admission bear the burden of proof to establish that they are clearly eligible to enter the United States," claimed the spokesperson. "In order to demonstrate that they are admissible, the applicant must overcome ALL grounds of inadmissibility."

A US government official familiar with these issues who spoke to The Register on condition of anonymity said such questioning has always happened – not just at border crossings but also at consular offices outside the US.

But because CBP has almost unfettered discretion in who can enter the US, if agents don't believe the travelers' claims about their reasons for visiting, they're going to ask questions, the official said.

The CBP has reason to ask questions because people do try to take advantage of the immigration system. For example, Senator Chuck Grassley (R-IA) last summer asked the Department of Justice to look into ways in which companies like Bitmicro Networks and Tesla, through contract firms, have allegedly abused the B business visitor visa to hire cheap foreign workers.

"Despite a long and undeniable history of abuse of the program to bring foreign workers into the United States under cover as 'business visitors,' regulations and field governance governing the program have not been updated in years," Grassley wrote.

While it may be that CBP managers in field offices have taken it upon themselves to pursue more aggressive lines of questioning, in keeping with the tenor of the Trump administration, the government official we spoke with expressed doubt that this might be the result of formal policy. The Trump administration is struggling to put political appointees in place, and most agencies at this point still rely on career bureaucrats for direction, the official said.

It may be that because people are concerned about Trump's statements on immigration, border challenges are getting reported more often, the official suggested.

David Berry, founding partner with Berry Appleman & Leiden LLP, among the largest firms that deal with immigration law, told The Register in a phone interview that it has always been within the authority of border officials in the US to inquire as much as they think is appropriate to establish the bona fides of anyone attempting to enter the country.

Berry said there were circumstances prior to the Trump administration when questioning at border crossings would become more prolonged and some line of questioning would arise to ascertain whether the statements in, say, a visa application were consistent with the background and circumstances of those seeking entry to the country.

"The Trump administration has expressed the clear desire, in many different directions, to amplify its immigration enforcement efforts and to improve the integrity of the process," said Berry. "What I have not heard of is an absolute policy to do one thing or another." ®

That story we broke in May? It is still true – and perhaps even worse than first thought