Brits catch God yet again screwing with our heads 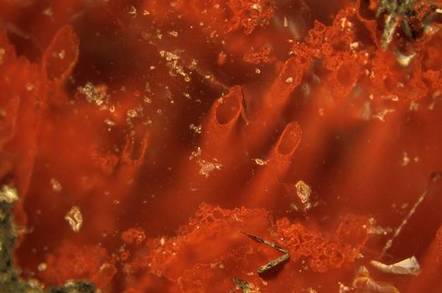 Even older than F1 boss Bernie ... A lifeform made of haematite, a form of iron oxide

Video As far as we know, nearly four billion years ago nothing walked the lands of Earth, but there was life in the seas. Now British boffins think they've found a fossil record of some of the earliest lifeforms on the planet.

The structures are tubes and filaments made of haematite – a form of iron oxide – that the team postulate formed around a deep-sea thermal vent. In a paper in Nature they explain how the fossils appear to show organisms forming around their hot, iron and nutrient-rich vents, as they still do today.

"We found the filaments and tubes inside centimeter-sized structures called concretions or nodules, as well as other tiny spheroidal structures called rosettes and granules, all of which we think are the products of putrefaction," explained study lead Dr Dominic Papineau (University College London (UCL), Earth Sciences and the London Centre for Nanotechnology).

"The structures are composed of the minerals expected to form from putrefaction, and have been well documented throughout the geological record. The fact we unearthed them from one of the oldest known rock formations, suggests we've found direct evidence of one of Earth's oldest life forms. This discovery helps us piece together the history of our planet and the remarkable life on it, and will help to identify traces of life elsewhere in the universe."

After studying the microscopic fossils at UCL and the rock formations in the Canadian Nuvvuagittuq Supracrustal Belt, the team felt that they are at least 3.77 billion years old, but may be from as far back as 4.3 billion years ago – back when the Solar System was still in the last stages of formation.

"Our discovery supports the idea that life emerged from hot seafloor vents shortly after planet Earth formed. This speedy appearance of life on Earth fits with other evidence of recently discovered 3,700-million-year-old sedimentary mounds that were shaped by microorganisms," explained the first author of the paper, UCL Earth Sciences PhD student Matthew Dodd.

"These discoveries demonstrate life developed on Earth at a time when Mars and Earth had liquid water at their surfaces, posing exciting questions for extra-terrestrial life. Therefore, we expect to find evidence for past life on Mars 4,000 million years ago, or if not, Earth may have been a special exception."

Pictures from the Curiosity rover on Mars suggest haematites might be seen on the surface of the Red Planet. If similar signs of life are found on Mars it might suggest that life, in some form or another, is a lot more common in the Solar System than first thought. ®