Invented before the Galaxy Note 7 went down in flames, the case detects heat and then sprays fire-suppressing gas 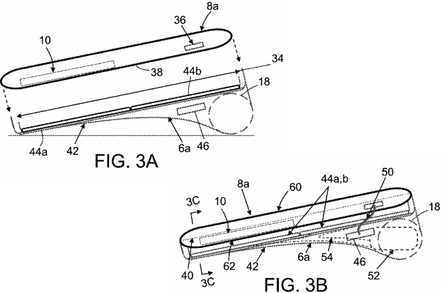 Boeing's fire-suppressing case, Image 3A shows a tablet computer being lowered down onto the case, where it rests in 3B. Suppressant gas canisters at bottom-right

Boeing has sought a patent for a “Fire detection and suppression pack for battery-powered personal computing devices.”

Filed in late 2015, before the Galaxy Note 7 went down in flames and airlines' safety spiels warned not to retrieve smartphones bursting into flames in the gears of business class seats, the device is described as “an open box-like dock case secured to a keyboard half of a battery-powered personal computing device”.

The idea seems to be that lithium-ion-powered devices used in cockpits or by other crew should sit in the case permanently, so that sensors can figure out if things are heating up. Should a battery look like it is about to go up in flames, cartridges full of one cartridge with CO2 to enhance cool-down effects and Halon 1301 will be released to snuff out the fire. There's even a “USB bridge assembly interface which directs additional flooding suppressant flow into the interior volume of the personal computing device.”

The patent application makes it plane (pardon the pun) that this device is intended for use in the cockpit and other crew-only areas of a plane. The rest of us aren't expected to tote them onto planes any time soon.

But the device is clearly useful for airlines, because we know many have moved their flight manuals from paper to tablet computers. Giving those devices a place to rest that also stops them bursting into flames seems a worthwhile innovation.

The patent application emerged last week, presumably under the rule that sees the United States Patent and Trademark Office release many applications eighteen months after filing. The full patent's yours for the reading here. ®

Video Built in 1969, it ended its days as a testbed for engines