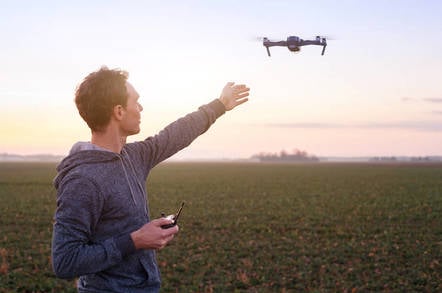 The Electronic Privacy Information Center (EPIC) filed a legal challenge [PDF] on Tuesday over what it says is a lack of privacy protections in the FAA's latest private drone rules.

The regulator has started enforcing these requirements: among them, drone owners must register their devices if they are larger than a given size, and obey strict limits on when and where the gizmos are allowed to fly.

The agency did not, however, include regulations against using drones to film people in their homes and other private situations.

Now, EPIC, in a petition to an appeals court in Washington DC, wants the FAA to update its rules to keep drones from peeping in windows and spying on people without their knowledge. The activists are demanding a review of the agency's red tape, basically.

The problem, says EPIC, is that there is no clear distinction on who is responsible for policing invasions of privacy by drone aircraft. EPIC says that the FAA had previously declined to add privacy rules to its drone laws, claiming that as an aviation body it does not have the jurisdiction to do so.

EPIC, however, counters that the FAA is the only organization that could have the authority to make regulations for drone flight. The campaigners also claim the lack of privacy safeguards is making their litigation against snoopers more expensive and difficult to pursue.

"The Federal Aviation Administration, the agency charged with regulating the national airspace, has refused to establish privacy rules governing the deployment of drones – unmanned aerial vehicles with sophisticated surveillance cameras – in the United States," EPIC charges. "The agency's failure to act threatens fundamental privacy rights, is arbitrary and capricious, and is contrary to law."

The FAA briefly touched on the subject last year when it introduced the new red tape, stating "although the new rule does not specifically deal with privacy issues in the use of drones, and the FAA does not regulate how UAS [unmanned aircraft systems] gather data on people or property, the FAA is acting to address privacy considerations in this area. The FAA strongly encourages all UAS pilots to check local and state laws before gathering information through remote sensing technology or photography."

Essentially, the FAA says there are plenty of other laws governing privacy in America, so it doesn't need to get involved. You might think that's a fair point. ®