You want a 4-SIM mobe? Never mind why – your wish might come true 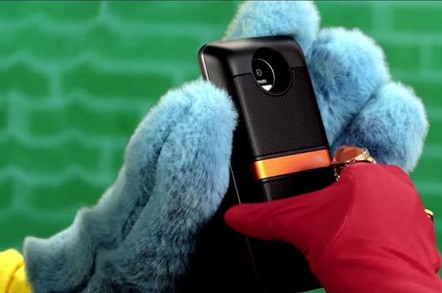 Might be furry good to get your paws on a modular smartphone, suggests a vid from Motorola

MWC While recent modular phone experiments from Google and LG have crashed and burned, Motorola’s more sober effort is the one that’s paying off.

The Lenovo-owned brand unveiled some new Moto Mods at the current Mobile World Congress in Barcelona, and gave a taste of where the accessory range could go.

An Amazon Alexa Mod will appear later this year, enabling voice communication to Amazon’s virtual robot buddy without unlocking the phone. A GamePad Mod and a range of further charging Mods will also be coming. But the concepts that Motorola teased were tantalising. Such as a multi-SIM card holder allowing hot-swapping of up to four SIM cards at once.

Useful for those NotSpots. Motorola also gave a glimpse of a portable printer Mod, a robot kit compatible with Lego Mindstorms, and a docking station, for a Continuum-style experience. Or hopefully better than Continuum.

(Android has already been tweaked to convert a phone into desktop PC-style experience with overlapping windows, and you can bet Google is watching closely.)

When the market looks like a mass of undifferentiated devices, then third-party accessories are a great idea. After all, it’s the third party that bears the cost of development and unsold inventory. Motorola primed the market nicely last year and you can currently snap on the Hasselblad True Zoom Mod, giving a camera-like experience with 10x optical zoom and a JBL SoundBoost Share Projector, amongst others.

Hardware-tinkerers can download a schematics and development kit, and just get going. ®