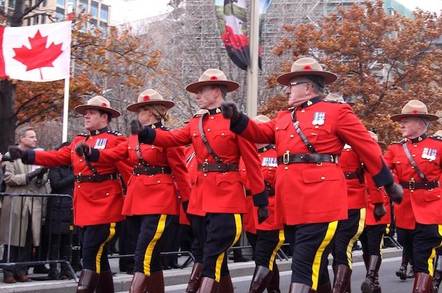 The head of the Royal Canadian Mounted Police has blasted his IT staff, claiming the number of computer outages hitting the force has more than doubled – and that cockups take twice as long to fix.

In a memo leaked this week, RCMP Commissioner Bob Paulson slammed the performance of Shared Services Canada (SSC), the consolidated IT team for government departments that was set up in 2011. The idea of the scheme was to merge government systems, including the Mounties' computers, under a single efficient support team – but the results have been unacceptable, Paulson said.

"Its 'one size fits all' IT shared services model has negatively impacted police operations, public and officer safety, and the integrity of the criminal justice system," he said in a report to Public Safety Minister Ralph Goodale.

Paulson said that in the past five years, critical IT failures have gone up by 129 per cent and the average length of outages has risen by 98 per cent. In January alone, the Canadian Police Information Centre (CPIC) database went down for 11 hours, leaving every Mountie unable to access it from their Blackberry handsets (well, this is Canada).

"A lack of CPIC access severely limits awareness of what threats officers may face when they respond to a call," he wrote. "If a major crime or incident were to occur during an outage of these systems, then the results could be catastrophic."

Paulson acknowledged that there were problems before SSC was introduced, but said the new organization had made things worse. The RCMP had bought new computer equipment to upgrade its systems, but the SSC crew took it and installed it in another government department instead.

Last May, the RCMP had to deal with the Fort McMurray wildfires, when the force carried out the largest fire evacuation in its history. They requested mobile devices from SSC for officers but they took three days to arrive, the RCMP got fewer handsets than it had requested, and many were unusable because SSC hadn't activated them and its support desk wasn't taking calls.

Following that incident, Paulson says he agreed with ministers that "the shared services model is not workable in a dynamic law enforcement environment." He got agreement – but since then nothing has changed.

"I am deeply concerned about the issues raised by the commissioner and the ongoing impact these deficiencies will have on Canadian law enforcement operations and, consequently, on the safety and security of RCMP officers, their policing partners and Canadians," replied Goodale.

When SSC was first introduced, the government hoped that it would reduce the complexity in the hodge-podge of different systems that had grown up in government. Auditors found over 100 different, largely incompatible email systems, over 300 data centers, and hundreds of telecommunications networks.

Consolidating all those systems must have sounded like a good idea on paper. But, as the Mounties' top cop has said, it could be putting lives at risk. ®

Unlike similar services, this one sold purloined passwords