US Air Force terminates Predator drones. Now you will fear the Reaper

Go to your brother, kill him with your gun. Leave him dying at his wedding, dying in the sun 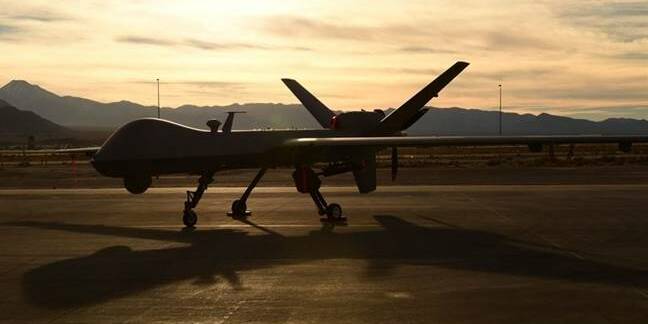 After more than 20 years of service, the US Air Force fly boys have today announced that the MQ-1 Predator drone is going to be phased out within a year.

Since its first operational deployment in the Balkan wars in the mid-1990s, the Predator has evolved from a pure surveillance drone to an armed flying weapon that has become a symbol of American military forces in large sections of the Middle East. But now the remote-controlled slayer of terrorists and wedding parties is being replaced by the more powerful MQ-9 Reaper drone.

"Right now the plan is to stop flying the MQ-1 in 2018, and that means we need to get transitioned this year," said Air Force Lieutenant Colonel "James," the 20th Attack Squadron commander.

"As part of that, we are going to stop flying the MQ-1 completely by July 1, 2017. We will gradually stand up our number of combat lines on the MQ-9, so by the end of the year we are only an MQ-9 squadron."

The Reaper has a number of advantages over its Predator counterpart, having been designed from the ground up to be an offensive drone. The Predator can carry only two Hellfire missiles, bumbles along at a maximum speed of 135mph and has a range of 770 miles.

"In the case of the MQ-1, I think we wanted more out of it, but we were at a physical stop on the airplane and needed a new one," said Air Force Colonel "Joseph," the 432nd Operations Group commander.

"I think when we look at the legacy of the MQ-1 we're going to be scratching our heads wondering how we did so much with so little. The men and women flying them, starting with two squadrons, took a science project and throughout many evolutionary changes made it what it is today."

In contrast to its older counterpart, the Reaper replacement can carry four Hellfires, or GBU-12 Paveway II and GBU-38 Joint Direct Attack Munitions, for 1,150 miles. It cruises at about 230mph and can carry a much higher payload of surveillance electronics for other missions (cowbell not included).

And when it comes to drones, cost is a critical argument. Drone fliers don't even need to be in the same locale – or even the same continent – as the aircraft they are flying, thanks to reliable satellite control feeds. Predator and Reaper drones typically have a two-person crew – one to fly the aircraft and the other to handle weapons systems.

That saves a lot of costs, but also comes with its own problems. While drone pilots suffer lower levels of post-traumatic stress disorder than pilots on the ground, a 2013 study found, the mental strains are heavier for controllers operating from home.

The study suggested that whereas conventional pilots seldom see the results of attacks, drone operators stay on station to record the attack. There's also the dislocation of spending a day fighting remotely in a cubical and then going home to see the wife and kids.

"You come home and have to make all the little choices about the kids' clothes or if I parked in the right place," said retired drone pilot Lieutenant Colonel Bruce Black. "And after making life and death decisions all day, it doesn't matter. It's hard to care."

The retirement of the Predator doesn't mean they will be banished from the skies. Instead the manufacturer, General Atomics Aeronautical Systems, has redeveloped the drone for civilian government use, renamed it the SkyGuardian, and is trying to flog it to police forces around the world.

In the meantime, the Reaper is the new platform of choice for military use by the US and its allies. In a typically British move, the UK air force has renamed its Reaper squadron as the Protector, to make it sound friendlier. ®