Bee boffins prove sesame-seed brain is all you need to play football (well, that explains a lot) 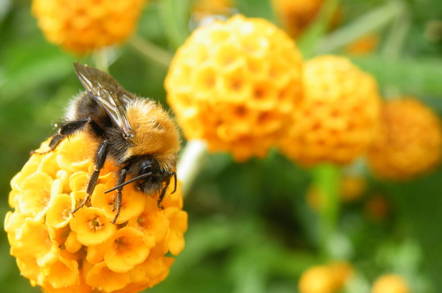 Video The humble bumblebee can be taught how to play soccer, even though its brain is only around the size of a sesame seed.

Previous studies into apoid behavior have revealed a surprisingly complex world. The fuzzy creatures can find their way home despite flying miles away to collect nectar; memorize and recognize objects; and communicate with their pals through the waggle dance.

A paper in Science reveals that the insects can also learn to manipulate tools – a sign of complex cognition skills seen in animals such as humans, primates, octopuses and birds.

Professor Lars Chittka, co-author of the paper and bee researcher from Queen Mary University of London (QMUL), said: "Our study puts the final nail in the coffin of the idea that small brains constrain insects to have limited behavioral flexibility and only simple learning abilities."

Researchers trained bumblebees to move a yellow ball to a specific region. Every time they scored a goal, they were rewarded with a sugary treat.

To learn how to play footie, the bees were taught with three different methods. One group learned by observing real and plastic bees complete the task. Another group watched the ball being guided to the center with a hidden magnet. A third group received no demonstration, but discovered a ball and the reward already in the goal.

Bees learned best when they were taught by other bees. It took longer for them to realize how to win sweet snacks when watching the ball being rolled with a magnet or when they weren't taught at all.

The nectar-loving insects didn't just copy what they saw, but understood the task well enough to know how to take shortcuts.

First, the bees watched another buddy move the ball into the goal. It was always the furthest ball away from the center, as the first insect was trained under the conditions that the closer balls were immobile.

But the watcher bees did not know this. When it was their turn to kick the ball, they chose the closest ball even though it was a different color they hadn't seen before.

"The bees solved the task in a different way than what was demonstrated, suggesting that observer bees did not simply copy what they saw, but improved on it. This shows an impressive amount of cognitive flexibility, especially for an insect," said Dr Olli J Loukola, co-author of the paper and researcher at QMUL. Rolling a ball isn't something bees are accustomed to, but the experiments show the stripy invertebrates can adapt and learn new skills.

"It may be that bumblebees, along with many other animals, have the cognitive capabilities to solve such complex tasks, but will only do so if environmental pressures are applied to necessitate such behaviors," Loukola added.

Bees bring down US stealth fighter

Bee pheromone is similar to genes found in mammals