Machines taught how to 'smell' by new algorithm. How will they cope with shower-dodging nerds? 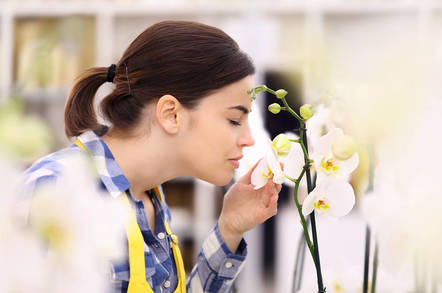 Machines don’t have noses – but they can now attempt to identify scents thanks to a nifty new algorithm.

A big international group of scientists pooled together to launch the Dream Olfaction Prediction Challenge, a crowd-sourced competition to learn how to predict the scent of molecules.

Essentially, the idea is to craft software that maps chemicals to what humans perceive as scent. You make a bunch of people smell a set of molecules and mark down what they think the scent of each test case is. Then you take that information and use it to train software to predict what the scent will be from other chemicals.

To do all this, a panel of 49 people were asked to sniff 476 molecules and characterize the intensity and pleasantness. They were sorted into 21 descriptions, including: garlicky, sweet, fruity, fishy, flowery. Some were chemicals with well-known scents, such as vanillin (vanilla) and methyl thiobutyrate (pungent cheese).

A large database correlated the chemical and physical properties of each molecule with the way each of the 49 subjects described the smells. Then teams of the scientists built an algorithm and trained it to identify the smells for 338 chemicals. A further 69 molecules were used so scientists could refine their models.

Smell is a difficult category to measure, and a standard deviation and mean had to be calculated across the population of these individuals to evaluate the algorithm’s performance.

A z-score, or standard score, allowed the judges to measure how many standard deviations away the predicted answer was from the mean value. A lower score means the algorithm is more accurate.

Results published in a paper in Science shows the best algorithm came from the team at Arizona State University, which had a standard score of 8.87 – a pretty good score – when trying to predict the smell perceived for the whole group of participants.

But when it came down to figuring out how an individual identified a smell, the algorithms were far off. The best score was 34.02 – a number much farther away from the mean – achieved by researchers from the University of Michigan.

Smell is a sense that scientists have struggled to figure out. The link between color and sight, and pitches and sound, are well understood. But trying to solve how smell is registered in the brain is more mysterious, as it relies on personal tastes and prior experience.

Results from the Dream Olfaction Prediction challenge may help scientists understand the science of scents and assist the food and fragrance industry in developing new molecules. ®