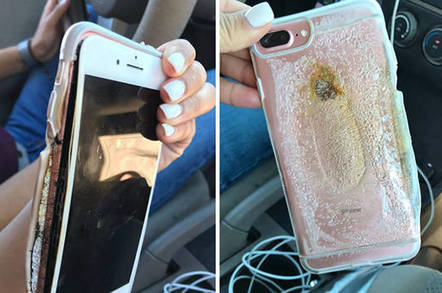 Too hot to handle: the smokin' iPhone 7 Plus (Photo: Brianna Olivas)

Vid Demonstrating yet again that Apple trails Samsung in mobile phone trends, an iPhone 7 Plus owner has reported that her prized possession recently blew up on her.

Video of the rose gold phone smoking was posted to Brianna Olivas' Twitter feed, along with a later picture showing the burned-out phone. Olivas, who is 18 and lives in Arizona, US, commented on the video: "So my iPhone 7 plus blew up this morning. Was not even using it, literally no explanation for this."

As the video was furiously retweeted, Olivas explained that she had actually gone to an Apple store the day before complaining that her phone wouldn't turn on. The staff there reportedly looked at it and decided nothing was wrong when they were able to get it working again.

The next day, while it was charging, the phone started to smoke. Placing it on a kitchen counter with one of the phone's splits propped up on a sink edge, the video captures smoke coming out of the casing.

So my IPhone 7 plus blew up this morning 🤗 was not even using it, literally no explanation for this pic.twitter.com/sQ8CJt4Y69

The images recall recent problems with the Samsung Galaxy Note 7, where a number of users reported their phones spontaneously bursting into flames. This led to the phone being formally banned from being taken on any planes in the US. The cause is expected to be the same: high-capacity lithium-ion batteries.

There were fewer than 10 reports of the Note 7 catching fire before the company issued a global recall, at huge expense to its reputation and bottom line.

Olivas' problem is not the first reported incident (that we're aware of) involving an iPhone 7. Back in October, a man in Australia claimed his iPhone 7 caught fire and burned out his car. And a Reddit user reported his phone had burned in transit. There were also isolated reports of iPhone 6 Pluses burning up.

While the iPhone 7 has been available for six months, the Galaxy Note 7 incidents all occurred within a few weeks of launch.

Regardless, it is worrying, and Apple said in an official statement that it would investigate the issue. ®