BOFH: Elf of Safety? Orc of Admin. Pleased to meet you

Come right this way. The PFY doesn't bite... that hard 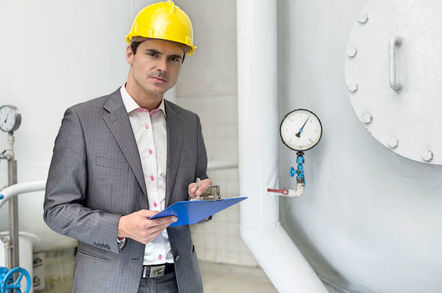 If I understand right, what you're saying is... a clipboard *isn't* enough to get me in? Mr BOFH? Pic: Shutterstock

Episode 2 There's a small-scale war going on between me, the PFY and the folk in Health and Safety.

Now your normal, run-of-the-mill person would rather perform a root canal on themselves with a hammer action drill than take on a Health and Safety role in any organisation. The position itself has all the prestige of an unflushed turd and, as such, tends to attract the human version of the blowfly.

Our particular blowfly has become a royal pain in the arse and will need to be dealt with.

In OUR department there's an unspoken rule that the newest employee in has to take over the H&S and Fire Warden roles and as the HellDesk has a higher turnover than the North Korean game-show "I'm a celebrity, please execute me" the poison chalice usually ends up being supped by one of those poor bastards - only about a month ago they got someone new who discovered the hidden power of the role and won't pass the chalice on.

The person in question has distinguished himself by investigating every Health and Safety incident with a view to establishing SOPs for everyday tasks. For instance our espresso machine.

The espresso machine outside Mission Control has only two users - the PFY and myself. It used to have more, but the PFY installed a solenoid which fires up the boiler while simultaneously shunting the pressure switch. When we saw some pleb creeping down the corridor with a coffee cup in his or her hand, the PFY would remotely activate the solenoid causing the relief valve to pop in a frightening discharge of steam which sometimes also triggered a relief valve in the person concerned to pop too.

Our blowfly's plan of monitoring the pressure gauge and getting the machine fixed will amount to nought given that the needle of the gauge was brazed into the green position by the same coffee machine engineer that advised the PFY about the solenoid trick.

This has not stopped his relentless quest for power, however, and now he wants access to the holy of holies: the server room.

"Sorry, Operations Staff only," I say when he asks.

"It's a Health and Safety matter."

"Yes, that's why it's Operations Staff only," the PFY says. "Surely you understand?"

"I'm doing an audit of the safety of the site," he continues, unabated, reaching for his ace-in-the-hole: "I need access to all IT areas to audit them. It's a workplace H&S requirement."

"No it's not," the PFY says. "I'm fairly sure it's only a requirement when there has been an incident in the area concerned. There's been no incidents."

In actual fact, the Server Room could rival a gun range for the blind in Health and Safety incidents, however none of them are in the H&S system - we've checked. And purged. Often.

"There are no RECORDED incidents," he continues, "but anecdotal evidence indicates that there have been many incidents."

"Anecdotal?" the PFY says. "You're not listening to the proles are you? Their idea of a Health and Safety incident is when the cafe fries their chips in reduced fat lard!"

He will not be put off however. He wants access, he wants it now, and he wants it permanently to ensure that he can "proactively manage workplace health and safety guidelines".

It turns out that he has a list of potential Server Room H&S issues culled from the past two years' worth of incident filings with the authorities - and he wants to inspect every one.

"Okay then," I say, tapping away at the access control system. "But I think you're wasting your time."

"I think we'll both see about that," he says, holding his access badge up to the plate.

"I have," I respond, "but you don't have the required competencies to gain access."

"Competencies - what the hell are you talking about?"

"Surely as a H&S person you know that while you may have ACCESS to a location, you also have to have a current competency for the area concerned."

"What about if you escort me?" he asks, weaselling his way around my plan B.

"Sure, no problems. All you need is a High Vis vest, Protective Boots and a hard hat," The PFY responds.

"And you have all those things do you?" he asks sarcastically.

"I don't need them - I've got my competency certifications," he blurts.

"Why the hell would I need them?"

"High Vis so that we know you're around and don't accidentally open a rack door into your face and a hard hat and protective boots so that if something falls on you from height you're not injured."

"I think we can dispense with them," he says drily.

"Can't, it's in your S.O.P," the PFY says, pointing to a paragraph down the bottom of the blowfly's most recent email about everyone having responsibility to ensure all steps are taken to ensure workspace safety is treated as a priority in their area.

Now he thinks we're hiding something, so he's even more keen to get his nose up the safety crack.

"This >scribble< >scribble< is a note to say that I have been fully advised of the potential risks and that as a Health and Safety Representative I am knowingly waiving the requirements for protective equipment >scribble<. So let's see that room."

"...so anyway, he opened a rack door which pulled a cable - which in turn moved a ceiling tile.." the PFY says to the Boss.

"...which is when we found the hammer that has obviously been sitting in the ceiling since they replaced the grid several years back."

"And don't tell me," the Boss says, "even after all those years the hammer still looks like it was only bought this afternoon and is no doubt completely clean of fingerprints?"

"I... don't know about that - that's for the experts to tell," the PFY blabs uncomfortably.

"That's not the end of the story, is it?" the Boss asks perceptively.

"Well, after the blow to the head, he stepped back through the coned-off area around the lifted floor tiles..."

"The cones perhaps having that new-plastic smell like they were only purchased this afternoon?" the Boss chips in.

"We recirculate air in the server room," I counter. "It can take years for things to lose their odour."

"And hit his head again," the PFY says.

"Just once?" the Boss asks.

"Yes, the Director had "sort of fall", but my money was on halon. I never do well at office sweepstakes."