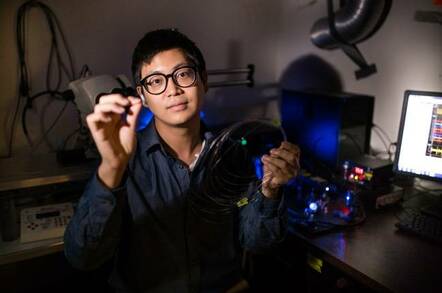 MIT brain boffins have developed a tiny fiber that can carry chemical, electrical, and optical signals back and forth between the brain and an external device, offering an improved path for testing brain functions and interactions.

The fiber is 200 micrometers wide, comparable to the width of a human hair. Described in a paper [paywalled] published in Nature Neuroscience, the slim strand is the result of collaboration between MIT grad student Seongjun Park, MIT materials science and engineering professors Polina Anikeeva and Yoel Fink, MIT professor of brain and cognitive science Gloria Choi, and 10 other researchers.

The scientists, building on previous work [paywalled], have used the fiber to inject viral vectors carrying light-sensitive proteins known as opsins into the brains of lab mice. The opsins, found in the retinal photoreceptor cells, sensitize neurons to light, thereby allowing the researchers to transmit light through the fiber in order to record the neural response.

This sort of optogenetic "interrogation" is used by neuroscientists to understand how neural pathways function, and has potential for future therapeutic use for conditions like Parkinson's.

Anikeeva says she expects the device will be primarily used in research animals. "The ability to deliver viral vectors is the key to translation of optogenetics to non-transgenic species," she said in an email to The Register. "We are hoping that our tools will accelerate basic neuroscience and contribute to future studies of human disease. Direct application in humans will depend on the clinical translation of optogenetics, which will probably take a few more years."

The primary application of the fiber involves the analysis of neural pathways, according to Anikeeva, but allowed that other uses may follow. "We hope that the lessons learned from those experiments will enable future therapies for addiction, Parkinson's, depression, and other neurological and psychiatric conditions," she said.

"Some features of the fibers such as recording and drug delivery can potentially be useful therapeutically. The first therapeutic applications will likely be in the peripheral nervous system, as it benefits from less cumbersome clinical approval process."

Made of polymers and polymer composites, the fiber is essentially a diagnostic conduit to the brain that can remain in place for extended periods without an adverse tissue response. Prolonged placement is necessary because the process of sensitizing brain cells to light takes about 11 days.

"[The fiber] can deliver the virus [containing the opsins] straight to the cell, and then stimulate the response and record the activity – and [the fiber] is sufficiently small and biocompatible so it can be kept in for a long time," Anikeeva told the MIT News Service.

Previously, neuroscientists have depended upon separate devices: needles for viral injections, optical fibers for light transmission, and electrodes for recording brain activity. Having a single conduit simplifies the process.

The challenge for the researchers involved making their fiber both flexible and conductive. Through materials engineering, they were able to develop a composite of conductive polyethylene and graphite flakes.

The researchers intend to continue their work in an effort to improve the fiber's biocompatibility.

At some point, the fiber may be integrated with an implantable device, so that the subject animal (or patient) does not need to be tethered to anything. Anikeeva said a wireless interface is a ways off. "We are really hoping to find electrical engineering collaborators to work with us on establishing a wireless backend." ®