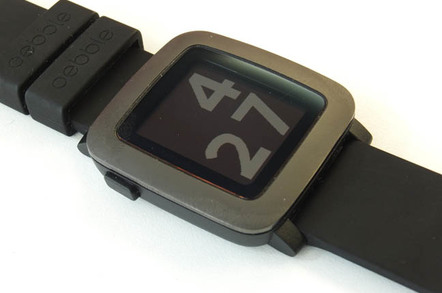 Fitbit has confirmed the long-held belief that it scooped up rival wearables maker Pebble for a bargain basement price before murdering the watchmaker.

Exercise-band maker Fitbit said in its latest quarterly earnings on Wednesday that it paid a mere $23m (£19m) when it agreed to purchase and then kill off Pebble's line of competing smartwatches.

This is the first confirmation of what Fitbit paid for Pebble, though it has long been believed that the ailing smartwatch maker had been sold for just a fraction of what it received in investments and backing from its Kickstarter campaign. In fact, $23m was significantly less than what early reports had speculated the price would be.

Despite this overall increase, rebates and price reductions, the cost of acquisitions, spending on more employees, an inventory write-off, and equipment costs all led to Fitbit reporting a $146m (£118m) loss on the final quarter of 2016, and a $103m (£82m) loss on the full year.

Fitbit expects the losses to carry on into the coming quarter and year, where it currently projects annual revenues to fall to somewhere between $1.5bn and $1.7bn (£1.2bn and £1.4bn) in 2017. ®

Look! Fitbit's made a watch that doesn't suck!

Analysis The web on your wrist... and elsewhere