Blames it on weak pound 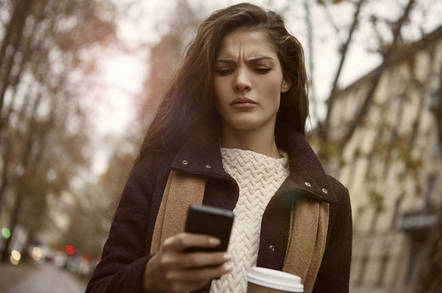 Overall reported group revenue at Telefonica dropped 5.3 per cent to €52bn (£43bn), with organic revenue up 1.3 per cent.

Last year Telefónica had hoped to sell its UK biz O2 to Three's owner Hutchison Whampoa for £10.5bn until the EU squashed that deal earlier this year.

Philip Carse, analyst at Megabuyte, said the most striking feature of the results was a 20 per cent reported and 42 per cent organic increase in capital expenditure to €278m (£235m) to meet 4G indoor coverage obligations of 95 per cent by the end of 2017

"This of course is the licence coverage obligation that O2 signed up to, and which the other MNOs are also voluntarily targeting," he said.

Yesterday IoT bods Sigfox struck a global deal with Telefónica to offer their unlicensed spectrum connectivity tech through the telco. However, IoT revenue is still around 0.5 per cent of the firm's total earnings, Carse noted.

Last year Juan José Hierro, head of Telefónica's newly created IoT unit, told The Register: "We cannot sustain our traditional business – it is something that is slow growing.

"That is one of the reasons why we are paying so much attention to IoT."

This week Telefónica also flogged a 40 per cent stake in its Telxius infrastructure subsidiary to private equity fund KKR Group. ®