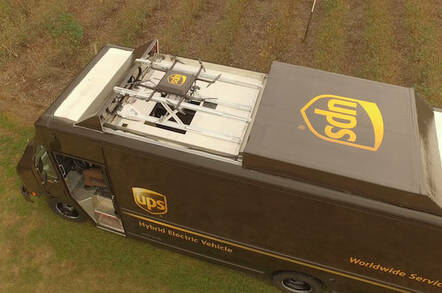 Delivery company UPS has become the latest concern to experiment with schlepping stuff about by drone, instead of wheeled vehicles.

But UPS isn't interested in sending drones out from its warehouse. Instead, the company's ' experiment saw it launch an unmanned aerial vehicle from one of its familiar big brown trucks, an effort it says is designed to give it a way of avoiding driving to remote destinations.

Or as senior veep for global engineering and sustainability Mark Wallace put it: “Imagine a triangular delivery route where the stops are miles apart by road. Sending a drone from a package car to make just one of those deliveries can reduce costly miles driven.”

The test saw a delivery truck modified with a roof hatch, through which the drone dangles a cage. A UPS driver opens the cage and pops the package inside, before sending the drone on its way. UPS imagines routes could be generated by its routing software, but for now is pre-programming destinations and directions.

The Workhorse Group drones the company's playing with have a 30-minute flight time and can bear 10 pounds of kit.

The flight was an experiment and UPS says it has no idea or plans about making this a regular way of delivering stuff. Indeed, the company is at pains to say it plans to keep its drivers and distinctive vehicles as its public face.

It's also not the first time the company has used drones. It already does so in remote areas and in its own warehouses to check stock levels. ®