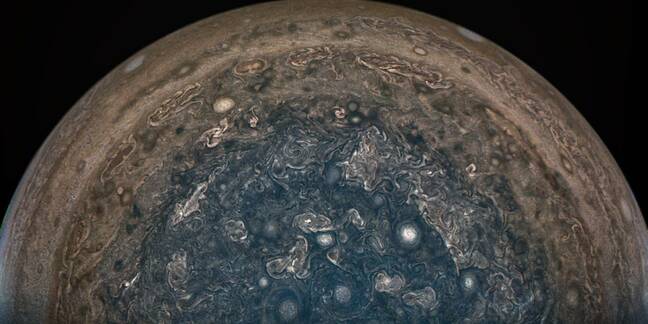 NASA's Juno probe will not venture any closer to Jupiter, and will stay in its current 53-day orbit for the remainder of its mission. That's due to faulty helium valves in the propulsion system, space boffins announced today.

The spacecraft has been circling the gas giant since July 2016. NASA scientists had planned to fire the engine to reduce its orbit period to 14 days, bringing it closer to Jupiter’s surface to scrutinize the alien world. The more intimate the probe gets with the gas goliath, the more it can peek through the layers of clouds, and study the structure, atmosphere and magnetosphere of the planet.

Well, scratch that. A malfunction with two helium valves in the Lockheed-Martin-built spacecraft’s main engine has dashed the space agency's confidence in its ability to move Juno closer without losing it completely. There's still plenty of work the craft can do, and simply put, it can't do that if it's out of control or destroyed.

“During a thorough review, we looked at multiple scenarios that would place Juno in a shorter-period orbit, but there was concern that another main engine burn could result in a less-than-desirable orbit,” said Rick Nybakken, Juno project manager at NASA’s Jet Propulsion Laboratory.

“The bottom line is a burn represented a risk to completion of Juno’s science objectives.”

The problem was first noticed in October, when scientists tried to pressurize the propulsion system. Data taken from Juno’s telemetry system showed it was taking longer than expected for the valves to open. They opened in just a few seconds during previous engine burns, but this time it was taking several minutes.

Don’t worry, Juno is “healthy,” NASA insists. “Its science instruments are fully operational, and the data and images we’ve received are nothing short of amazing,” Thomas Zurbuchen, associate administrator for NASA’s Science Mission Directorate, said in a statement.

“The decision to forego the burn is the right thing to do – preserving a valuable asset so that Juno can continue its exciting journey of discovery.”

A longer time circling Jupiter from a greater distance means the probe can spend more time exploring the planet’s magnetosphere to try to learn how it interacts with the solar wind. It also means Juno will spend less time in the firing line of the gas giant’s lethal radiation belts, so it should last longer in space.

NASA's budget is enough to allow the probe to operate through July 2018. The team will reevaluate the mission after that to see if it’s worth extending. Juno has discovered that Jupiter’s magnetic fields and aurora are larger and stronger than previously thought. The various radiation belts and zones shape the planet’s distinctive cloud patterns.

It has successfully orbited the gas giant four times already, and its next close flyby will be on March 27.

NASA has set up JunoCam to allow people to vote on what features they’d like the spacecraft to image during each flyby. ®

Pic We know this sounds like a tall tail but...