Explosive news that, for once, doesn't involve a self-detonating battery 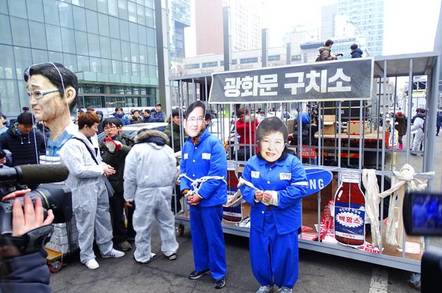 Samsung Group vice chairman Lee Jae-yong has been arrested, accused of bribery, embezzlement, and perjury, and taken to jail near Seoul in South Korea.

The Seoul Central District Court issued a warrant for Lee's arrest on Friday, after rejecting a warrant request from prosecutors last month for lack of evidence.

A Samsung spokesperson, on the phone to The Register, refused to deny Lee had been arrested. In an emailed statement, the spokesperson said: "Samsung has not paid bribes nor made improper requests to the President seeking favors. We will do our best to ensure that the truth is revealed in the court proceedings."

Samsung's statement asserts its own innocence, and makes no reference to Lee beyond suggesting there will be court proceedings about something or other.

Investigators believe Lee, Samsung's heir-apparent following the hospitalization of his father, chairman Lee Kun-hee, three years ago, made donations of as much as 43 billion won (US$37.6 million) to foundations controlled by a friend of South Korean President Park Geun-hye in exchange for government support for the 2015 merger of Cheil Industries and Samsung C&T.

The deal is seen as an effort to consolidate Lee's position as the leader of Samsung.

Lee, known as Jay Y Lee in the West, has acknowledged making donations to foundations run by Choi Soon-sil, a confidante of Park, but denies seeking favors in return, according to The Financial Times.

Park was impeached in December by her country's National Assembly, following massive street demonstrations over government corruption. Hwang Kyo-ahn, the Prime Minister of South Korea, is the acting leader of the country, until the Constitutional Court of Korea decides whether to accept Park's impeachment.

Amid uncertainty about its own future leadership, Samsung last year suffered the embarrassing failure of its Note 7 phone, which proved so prone to self-combustion that it was banned from US airlines and had to be withdrawn from the market and recalled.

The fiery phone fiasco has cost the company billions, but Samsung Electronics nonetheless managed to show healthy revenue and strong profit growth in Q4 2016, thanks to its semiconductor business and persistent demand for less-volatile mobile devices.

The economic health of Samsung is a matter of national interest in South Korea. The company and its affiliates are estimated to account for almost a fifth of the country's exports. At the same time, the case represents a significant test of the country's ability to police the chaebol – family-run conglomerates that dominate the South Korean business landscape. ®