Dead cockroaches make excellent magnets – now what are we supposed to do with this info?

They'll stick notes to fridges in the aftermath of nuclear war? 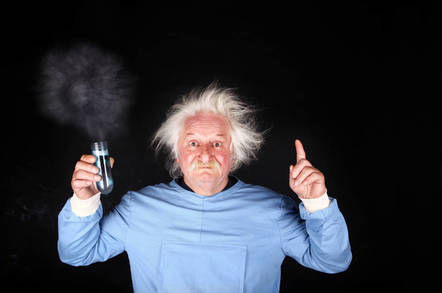 In a bizarre experiment, a team of international physicists gassed a group of roaches to death with nitrogen before rinsing them in an ultrasonic bath. The luckier ones were kept alive and fed an unlimited diet of water and cat food pellets before they were chilled to 4°C (39°F) to stop them moving.

Next, the researchers inserted the unsuspecting pests into individual plastic bags before placing them in-between a pair of magnetic plates. The roaches were subjected to a magnetic field strength of 3 kiloGauss (0.3 Tesla) – over a hundred times stronger than a fridge magnet – for 20 minutes.

A Cesium atomic magnetometer was used to measure the decay of magnetization over time. Surprisingly, there was a massive difference in decay time between the deceased and alive cockroaches.

It took a mere 50 minutes for the magnetization to plummet to zero for breathing specimens, but a whopping 47.5 hours for the dead ones.

It’s all down to the magnetic iron sulphide contained within the critters’ cytoskeleton cells, the scientists propose. The particles are around 100 nanometers in diameter, and become aligned with the external magnetic field during magnetization. Brownian motion – the random jiggling of the particles suspended inside the liquid of the pests – causes the magnetic iron sulphide particles to break out of position, weakening the roaches’ internal magnetic field.

Since the bodies of the dead bugs harden, Brownian motion is more restricted and the decay of magnetization is slowed. But in live insects, the liquid-containing magnetic iron sulphide stays runny.

A more interesting question, perhaps, is why did the scientists decide to carry out this research? What motivated them to gas and magnetize cockroaches?

“Our work fills the gap between behavioral experiments on insects in magnetic fields and characterization of magnetic materials in their bodies,” the team's paper – titled In-vivo biomagnetic characterisation of the American cockroach – reads. The study – performed by Ling-Jun Kong, Herbert Crepaz, Agnieszka Górecka, Aleksandra Urbanek, Rainer Dumke, and Tomasz Paterek – has yet to be published, as far as we can tell. It was submitted to the Arxiv website earlier this month.

Many questions remain, the researchers admitted. But the study could help bioengineers design new magnetic sensors, the mad-cap gang concluded. ®