GoDaddy CEO says US is 'tech illiterate' (so, yeah, don't shut off that cheap H-1B supply)

At least wait until there's a pipeline from schools, he says 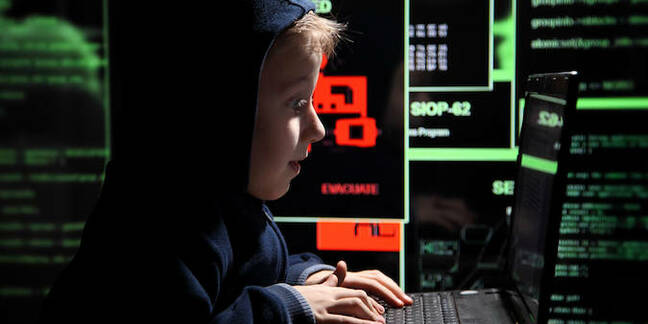 Stay in school, kids ... Is there or isn't there an STEM drought in the US?

American techies who discovered their Silicon Valley bosses were suppressing their wages illegally now have to suffer fresh insult to injury.

GoDaddy CEO Blake Irving said this month that "with so much technical illiteracy in the US," it's no wonder companies use overseas workers on H-1B visas to fill science, tech and engineering positions. Not enough Americans are up to scratch, he said, and tightly capping the number of graduate immigrants allowed into America will "cripple" the nation's tech sector.

Writing on his blog, Irving made a rallying cry to preserve the H-1B visa program at least until the American education system cranks out many more students into STEM degrees. He fears it will be disastrous for Silicon Valley if the pipeline of trained workers is suddenly shut off by President Trump's planned overhaul of the work-permit scheme.

About 85,000 H-1B visas are issued each year to degree-holding foreigners to work in the US. American corps are known to use the work permits to draft in cheap labor: foreigners, grateful for the opportunity to live and work in the Land of the Free, accept less pay than the US citizens they end up replacing.

"With so much technical illiteracy in the US, the H-1B visa program has become America’s secret weapon warding off economic catastrophe," Irving wrote.

"Troublingly, the US is not going to see a vastly greater pipeline of domestic technical talent coming from our universities anytime soon. It will take us years, if not decades, to move a large enough wave of students through primary and secondary schools, undergraduate and advanced degrees to exit the pipeline into the elite technical workforce. Until that day, the most technical jobs (all 545,000 of them) will simply sit open if H-1B visas shrink or disappear.

"The cost will be paid in lost technological progress, less new energy, less communications, and less commerce and a weaker America. I believe we can turn the tide of STEM education, but it’s going to take years and we need to be thoughtful about what happens in the meantime."

The suggestion of an STEM labor drought in the US has been contested, though, and even described as a “myth.” As the IEEE Spectrum journal claimed a few years ago, America produces far more STEM graduates every year domestically than can get jobs in science, technology or engineering. A good chunk of STEM graduates choose not to go into an STEM career.

Professor Norman Matloff also calls the STEM “crisis” synthetic. The computer-science prof, based at the University of California, Davis, has long argued that the US has "a surplus of homegrown STEM workers now ... This is all about industry wanting to lower wages.”

After years of enjoying the benefits of reduced labor costs from the H-1B visa scheme, technology companies are now facing a backlash. US Congress is considering laws to amend H-1B red tape, and the new president has also raised the issue.

House Rep Zoe Lofgren (D-CA), an ex-immigration lawyer, has introduced her own legislation that attempts to curb H-1B abuse by "removing incentives for companies to undercut American wages and outsource jobs." Meanwhile, House Rep Darrell Issa (R-CA) has introduced a bill that requires H-1B workers to be paid at least $100,000. And House Rep Jason Chaffetz (R-UT) has proposed amendments to rules on employment and family-sponsored visas.

In the Senate, Senator Chuck Grassley (R-IA) has introduced H-1B and L-1 visa reforms. All the proposed law updates are in the early stages of development. ®

Now might be a good time to change your passwords, folks

Updated We'll try and sort it out by the end of the day, it says