Totally not-crazy billionaire Elon Musk: All of us – yes, even you – must become cyborgs 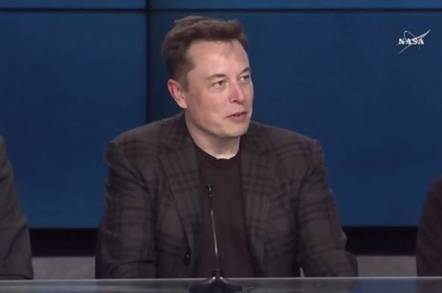 Tesla CEO and tunnel-boring enthusiast Elon Musk says humans will need to merge themselves with machines, lest they are replaced by them.

Speaking at the World Government Summit in Dubai, the billionaire founder of SpaceX said that as artificial intelligence systems become more prominent, people will need to compensate for their biological shortcomings by integrating their brains with computers.

"It's mostly about the bandwidth, the speed of the connection between your brain and the digital version of yourself – particularly output," Musk was quoted as saying.

"Some high-bandwidth interface to the brain will be something that helps achieve a symbiosis between human and machine intelligence and maybe solves the control problem and the usefulness problem."

Musk is no stranger to AI development – his OpenAI non-profit looks to advance the development of machine intelligence platforms. He has also previously issued warnings about the dangers posed by AIs if not properly managed.

In this case, Musk believes that humans who don't want to lose their jobs to increasingly capable AIs will have to use machines in some form to increase their own brainpower. The first jobs to go, says the Tesla boss, will be drivers, who are made obsolete by self-driving vehicles.

"But there are many people whose jobs are to drive. In fact, I think it might be the single largest employer of people, driving in various forms," Musk said. "So we need to figure out new roles for what do those people do, but it will be very disruptive and very quick."

Musk also used his appearance at the summit to announce that Tesla will be expanding its operations into the UAE with a pair of shops in Dubai and Abu Dhabi. Musk said he also has plans to build charging stations throughout the UAE. ®

Video Testing times for SpaceX as another Starship prototype implodes