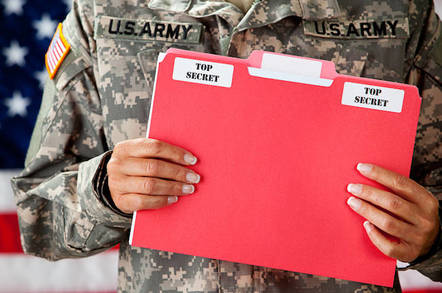 The legal paperwork [PDF] lays out the US Department of Justice's case against Martin, 52, of Glen Burnie, Baltimore. During those two decades, he worked as a freelancer for seven private companies on various Department of Defense and US intelligence projects. One of those seven outfits was Booz Allen Hamilton, Edward Snowden's one-time employer.

In a statement, prosecutors said: “Martin held security clearances up to top secret and sensitive compartmented information (SCI) at various times, and worked on a number of highly classified, specialized projects where he had access to government computer systems, programs and information, including classified information.

"Over his many years of holding a security clearance, Martin received training regarding classified information and his duty to protect classified materials from unauthorized disclosure.

"The indictment alleges that beginning no earlier than 1996 and continuing through August 27, 2016, Martin stole and retained US government property, including documents that bore markings indicating that they were property of the US and contained highly classified information, including TOP SECRET/SCI. A Top Secret classification means that unauthorized disclosure reasonably could be expected to cause exceptionally grave damage to the national security of the US.

The list of files Martin is alleged to have stolen and stashed at home is extensive: NSA organization plans from 2014; also from that year, documents detailing potential foreign cyber targets and foreign network hacking techniques; a 2009 US signals intelligence directive describing “specific methods, capabilities, techniques, processes, and procedures” for defending government computer systems; correspondence about NSA overseas projects from 2008; and so on and so forth.

The indictment also lists five US Cyber Command (CYBERCOM) documents, a CIA file, and a 2007 National Reconnaissance Office dossier discussing the launch of a spy satellite with an “unacknowledged ground station.”

Martin was collared and charged in October 2016.

Earlier this week, The Washington Post noted that Zachary Myers, an assistant US attorney with the District of Maryland, told a court last year Martin had 50TB of potentially secret and top-secret data at his home.

It is alleged Martin even copied penetration tools from the NSA's elite computer hacking squad, the Tailored Access Operations. Part of TAO's toolkit is believed to have leaked online via the mysterious Shadow Brokers crew of miscreants. Some in the media and infosec world have tried to link Martin to the Shadow Brokers' leak.

Martin's lawyers insisted their man wasn't another document-leaking Edward Snowden, but rather a compulsive hoarder who “loves his family and his country,” and that he simply took the secret files home with him with no ill intentions.

Martin, who is awaiting trial behind bars, is due to appear before US magistrate Judge A. David Copperthite in Baltimore on February 14. The ex-contractor faces up to 10 years in the cooler for each of the alleged 20 counts of willful retention of national defense information. ®