Three-week hearing expected, and yes, it is about the NSA's mass surveillance activities 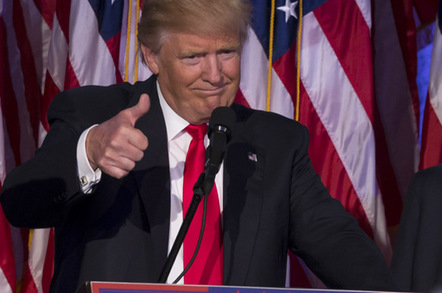 The future of the relationship between the European Union and President Trump's United States is being decided in a Dublin court hearing which is expected to continue for the next three weeks.

While the president has backed away from previous comments regarding NATO and torture, his administration has offered no suggestion of a radical departure from the nation's existing data collection regime, which the Irish Data Protection Commissioner (DPC) believes contains "deficiencies" when it comes to handling EU citizens' data.

Amid the continuing controversy regarding the transatlantic data trade and the approach of the EU's new General Data Protection Regulations, Trump's prime contribution to Europeans' data protection to date has been an executive order ensuring that agencies' privacy policies explicitly exclude non-Americans.

The DPC's complaint does not directly cite this executive order, but rather relates to the US National Security Agency's en-masse pilfering of data held by American corporations on EU citizens. This led to the collapse of the Safe Harbor agreement, which allowed American businesses to affirm they were upholding European privacy laws even outside of Europe, after a European Court of Justice ruling in favour of Austrian lawyer Max Schrems in 2015.

A replacement agreement was quickly assembled and dubbed Privacy Shield to the outrage of critics, but during the interim Schrems had complained that companies such as Facebook were continuing to shuffle data westwards using "model contracts" or "standard contractual clauses", which Facebook, Microsoft, and Salesforce claimed allowed customers to practically ignore the judgment.

Over the next three weeks, the Commercial Court in Dublin will hear legal arguments against American corporations shuffling the personal information of EU citizens back to the US. The "provisional" view of the DPC is that there are indeed "deficiencies" concerning the rights of EU citizens and their data under US law, specifically in regards to accessing remedies in America for any breach of their rights to privacy.

The potential commercial effects of a ruling against the United States' data protection regime could be enormous, and to those ends the US Government has successfully sought to intervene in the case. Trump's top boys are set to argue that "significantly enhanced" protections were introduced under Obama to ensure that EU citizens' data is protected in accordance with EU laws.

The case opened before Ms Justice Caroline Costello, in Court Number 29. The DPC's office told The Register that "it is expected that the case will run for three weeks, during which time we do not anticipate making daily comment on the matter."